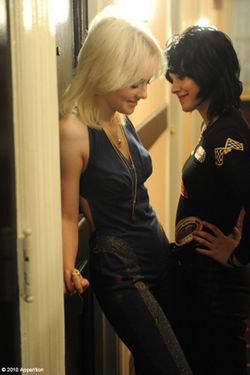 The Runaways, starring Kristen Stewart and Dakota Fanning (both in The Twilight Saga: New Moon), is gritty, impressionable, and uneven. Jett is a co-executive producer and the mostly underwhelming result matches Currie's less-than-fulsome autobiography of an antecedent with an intended demographic looking to see what earned the former's "bad reputation." It does have the tough, arguably electric L.A. music scene of some 35 years ago going for it.

The titular group enjoys wild success and turns out to be a family of misfits thanks to a "Svengali-like influence" of rock promoter Kim Fowley, a scene-stealing Michael Shannon of Revolutionary Road. Director Flora Sagismondi stages it all with some edgy luridness with Fanning filling out the blonde sex-kitten of a mascot with a certain skimpy fervor. And, some will like her locking up with a more secondary Jett, as Stewart gets into a talented, pure rock n' roll hearted musician who'll have her own group with some a bit of her awkward introvertedness she's demonstrated in the successful Twilight films.

Ultimately, however, this may not be the dramatized "behind the scenes" fans will want to run to. Besides the hedonism and a creepy Fowley which really did in Currie, there seems to be something missing in the ominous turbulence as The Runaways doesn't deliver the kind of show-stopping vibe even with Fanning (Push) ardently graduating from her childhood acting (I Am Sam) days.