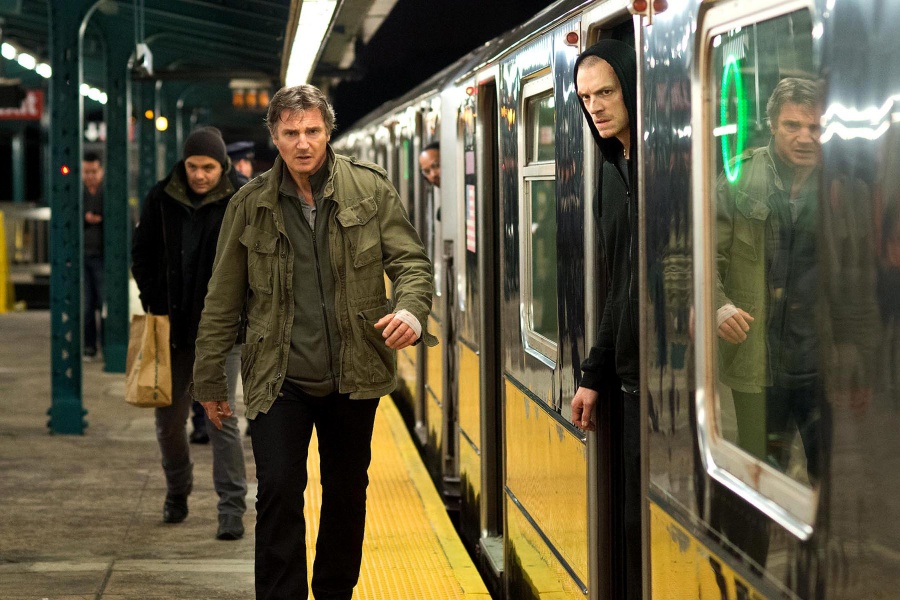 
Liam Neeson begins the film lying on his back in a wooded area with a shot gun at his side.  He makes it clear that he has had a low life and takes us back 16 hours which are filled with redemption, action, violence and some fine photography.

Director, Jaume Collet-Serra uses camera angles particularly from one floor to the other and from the top of the city to a dark dangerous back yards.  The beauty of the city of New York from the lights of the Chrysler Building down to the dark dirty dangerous rail yard where the climax occurs is one of the characters in the story.

A hit man has a long road to travel for redemption.  Neeson has slipped away from punishment from the underworld hits he has accomplished over many years. The hits directed by Ed Harris a friend of sorts, eventually finds himself in a Duel In The Sun scenario but it happens in the dark.

Neeson protecting his son draws fire from both the police and the underworld but particularly from his friend Harris because of a son who doesn't listen to advice from his father, who does?

The 16 hours are filled with car chases, assignations, many dead policemen, crushed cars, exploding apartment housing and Neeson who has by now become the action figure for revenge on the World film scene.

This is men ,memo-mono, all the tough guys in town are after Neeson once he is forced to kill Harris' son to save his son.  Not a difficult decision but one with ramifications.  His son appears grounded with two sweet little girls who fall in danger before the reckoning comes.

Now the redemption part is difficult because in that first scene he admits he is a bad guy and has more regret than he can account for.  But the screen play forces son and father to work together in a very uncomfortable situation.

Will Neeson redeem his dark life?  That is the question.  In any case the 16 hour process is filled with neat action, and a very dark location which Neeson must climb out of in just 16 hours.