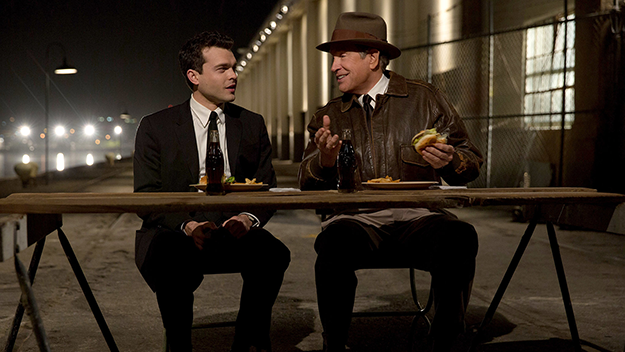 
In his long gestating, sprawling labor-of-love Rules Don't Apply, 79-year-old Warren Beatty is back as eccentric, economically-diversified Howard Hughes set mainly when the brother of Shirley Maclaine was making a name for himself on the Hollywood scene. Like the president-elect Donald Trump he had an influence on women given his association with RKO studios where he made the big-budgeted Hell's Angels.  Lasses trying get in show-business could have a jumpstart on a screen test if they presented themselves amicably to Hughes.

This isn't much like Melvin and Howard or The Aviator with producer, star, and co-writer (with Bo Goldman) Beatty holding back on the tycoon's more lecherous or compulsive behaviors (how about some banana-nut ice cream?). This polished product (pretty pristine in its period presentation from contributors like lenser Caleb Deschanel) has an erratic quality like the man inheriting what served as a holding company for many enterprises, including aviation estate, entertainment, defense, and mining. The actor of Shampoo, Splendor In The Grass (Rules is set mainly before this film's release) and Bugsy is spirited enough for the role, though maybe damped down considering how enigmatic he can be to his employees. Especially when he applies for a humungous bank loan from Oliver Platt's Forester.

The larger roles in what could be seen to some discerning viewers as an analogue to Me and Orson Welles are occupied by the lovely Lily Collins (British actress/model of Mirror Mirror) and Alden Ehrenreich (Hail, Caesar and the upcoming Rogue One as a more youthful Han Solo). Too bad their roles aren't really adequately developed given the run-time, but Beatty allots them some latitude to make a palatable rapport before Hughes (who sounds like Jack Nicholson) and his peculiar tendencies come to the forefront.

Collins's beauty-queen starlet and wishful virginal thespian Lucy is whisked to L.A. from Virginia by her mother, Lucy (Annette Bening, Beatty's off-screen missus and co-star of Bugsy) and gets on Hughes's good side as well as his engaged driver Frank Forbes (Ehrenreich) who becomes hers while harboring a desire to get into real estate himself. Spiritually they have a connection in his pious Methodist and her Baptist which helps fuel a mutual appeal. Yet, their tenets prohibit unmarried intimacy as well as Hughes's policy of no hanky-panky between the ingénues and those on his payroll. The title, obviously, comes into play to provide a spark like what the once dreamboat Beatty did with comely patrons in the aforementioned Hal Ashby comedy/drama co-starring Julie Christie, Goldie Hawn, and Lee Grant. Steve Coogan is a part of possibly the funniest sequence aboard a plane flown by Hughes (remember the 'Spruce Goose') with a jittery Frank on board.

Rules Don't Apply will likely draw a (limited?) AARP viewership in spite of the presence of Collins and Ehrenreich to envelop younger romantics considering a sizable, notable roster including Matthew Broderick as a top Hughes lackey. Alec Baldwin (solid as Pan Am executive Juan Trippe in The Aviator when Hughes gained control of TWA) and Martin Sheen turn up as advisers, while off-screen spouses Ed Harris and Amy Madigan pop-up as the parents of Frank's younger fiancée (Taissa Farmiga), and Candice Bergen isn't recognizable as an administrative assistant. Considering less of an emphasis on the magnate's saturnine personal discord and disintegration, Beatty has enough of a strange moxie here similar to his portrait in his plucky political satire "Bulworth" to make for fond memories of an icon who marked the end of Old Hollywood.