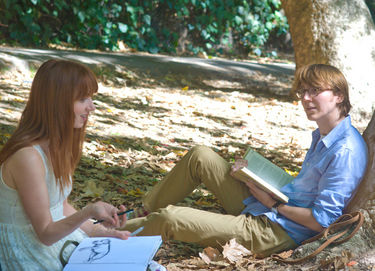 
A pliant, imaginative romantic fable from the directors of Little Miss Sunshine (Jonathan Dayton, Valerie Faris) stars Paul Dano (Being Flynn, Cowboys & Aliens) and Zoe Kazan (Me and Orson Welles, Revolutionary Road) and could be an art house summer sleeper.

Ruby Sparks is the titular, new creation from Dano's Calvin, a writer who found much success with his first novel, but has been slumping when it comes to formulating a new project and personally. Kazan skillfully endows that alluring figment of Calvin's thought process as the leading female character who comes to fruition and happens to end up in his living room one day.

The askew, bright mood captured by Dayton and Faris lets the premise glide well enough as Calvin is exhilarated at first by his creation but then goes through plenty of mental hopscotching when the reality can be altered every time he envisions her at the keyboard. Adequate backup is filled by Elliot Gould, Annette Bening, and Antonio Banderas in what excites an artistic vision and the unanticipated interplay that can occur from it. Certain viewers may be cued to the likes of the capable Stranger Than Fiction or earlier She's All That which was a nod to the well-regarded Pygmalion tale.

What essentially is a pleasing two-handler from the aspect of where the Calvin/Ruby connection can head with Dano and Kazan possessing much on-screen chemistry. Calvin's quandary as a struggling author and man is realized through all the trickiness and ambivalence that can be grasped from an unusual, complicated woman like Ruby can spark his life. Dayton and Faris may not have quite the reins over the material (not written by them) in their latest outing, but still indicates a kind of goofy magic that warmly invigorates more often than frustrates that may even have older viewers harken back to Jimmy Stewart with a giant rabbit in Harvey.