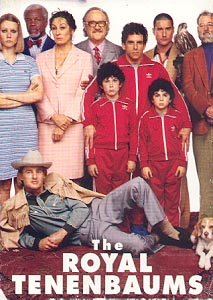 The Royal Tenenbaums may not look good for those trying to find some redeeming values in a dysfunctional family, but Wes Anderson's latest movie digs pretty deep with wit and pathos that may prompt delayed internal responses with viewers who will probably find this New York story to be quite odd.

Gene Hackman's Royal, a litigator who ran into hard times and was imprisoned for a short time, has taken it upon himself to make things right.

Bad things happen to him at home with the breakup of his marriage to Angelica Huston's Etheline, an archaeologist and mother of three prodigy children.

Ben Stiller is Chas, a big financier now, who recalls what his father did when it came to banking and a BB gun.  Margot, who is reminded that she is adopted, played as an adult by Gwyneth Paltrow, is a closet smoker whose middle name isn't known by her dad.  He didn't think the work of her lauded playwright daughter back in the ninth grade was real.  And she is in a sterile marriage to neurologist Raleigh St. Clair, a small role for Bill Murray.

Royal's third child is now a retired tennis champion, Luke Wilson's Richie, who disappeared on an ocean liner for a year and has a secret passion for his sister.  But Margot is spending time with Richie's friend Eli Cash, played by Owen Wilson.

Royal is back feigning stomach cancer which gives him six months to help breathe some life into a clan which has become increasingly neurotic, especially the kids.

The Royal Tenenbaums works its detailed production and diverse costumes into the personalities of the characters which offer a credible look at a fictitious Manhattan.  Anderson and Wilson seem to have opened up a brooding New York fairy tale with atypical street names and chapter openings and the use of an unseen narrator (Alex Baldwin) explaining how the gifted young Tenenbaums were brought down by betrayal, failure and disaster.

The roles of the kids may counter the over achieving of Anderson's unique vision, but Paltrow, along with Luke Wilson and Stiller put a suppressed wistful current into them lifted by their words and expressions.

Even Huston uses Etheline's confusion and impassiveness for measurable effect as she receives a marriage proposal from a black, reticent accountant and bridge partner - a touching Danny Glover.  Murray does his best as an unsettled husband, but it's Hackman who makes Tenenbaums an eccentric pleasure.

Anderson comes across as a spoiled, ambitious brat in the way he coils around his wackiness.  He knows how to relate subtle emotion and wryness from internal hardships which lift up through precious absurdities.