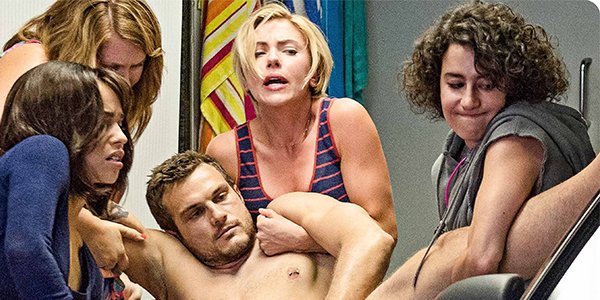 
Bride-to-be, Jess (Scarlett Johansson)and aspiring senator, and college friends-for-life, Alice (Jillian Bell), Frankie (Ilana Glazer), Blair (Zoë Kravitz),  and Pippa (Kate McKinnon), depart for a weekend of bachelorette partying in Miami, and disaster follows after Alice kills a "stripper". They ultimately decide to dispose of the body, and many setbacks leave them back at their rented house in Miami with the dead body.

Full of drug abuse and an overuse of penis aimed humor, the film attempts to reverse gender roles in comedy with its mostly female cast, whose bad decisions set up the absurd events. Unfortunately there is nothing funny in their situations, and the jokes they throw at the audience are crude and cringeworthy at best, though expected being it is a raunchy comedy.

These two dimensional characters haven't learned any valuable lessons by the end of the film, except killing a man as long as he is a jewel thief has absolutely no consequences. Jess marries, her friendship with the four ladies deepens, and everything works out in her favor as her misdeed actually gains her popularity among the voters. All's well that ends well, I suppose.