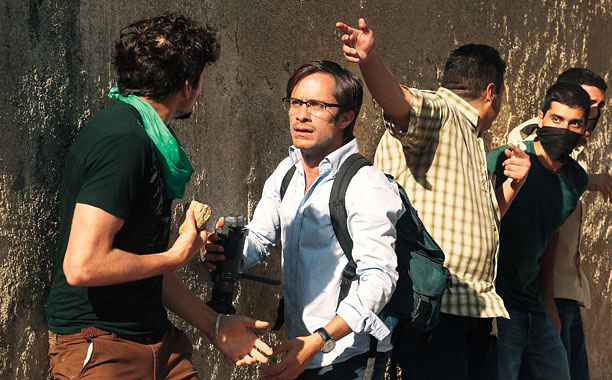 
Satirical small-screen host Jon Stewart makes a pretty auspicious directing/writing debut from a London reporter's memoir providing vivid texture to a harrowing Iranian-set injustice though some may relegate it to a political sideshow.

Rosewater stars Gael Garcia Bernal (No, Casa de mi Padre), Kim Bodnia, and Shohreh Aghdashloo (Percy Jackson: Sea of Monsters, House of Sand and Fog, The Adjustment Bureau) with Stewart (also an executive producer) keeping the proceedings fairly witty and bright, getting the most out of his performers in a sensitive look at the arguably inalienable right to speak one's mind.

The initial time frame and setting is London in 2009 where Bernal's Maziar Bahari with a pregnant wife (Claire Foy) goes to Tehran for the 2009 elections.

When protests ensue after Ahmadinejad tops the polls, Maziar's coverage puts in harm's way after being arrested in the home of his mother (the Iranian native Aghdashloo who almost entered the political scene) for espionage and psychologically pushed to the limit at Evin Prison for 118 days. Recollections of his passed-away sister (Golshifteh Farahani) and father(Haluk Bilginer) help him through an intense interrogation by a titular man (a fine Bodnia of In a Better World) named for the aroma he emanates and is certain of the journalist being an undercover agent.

The filmmaking suggests a vivid account of a factual event with its mundane intricacies based on fear and paranoia perhaps as a counterpart to the likes of post 9/11 locales as Bagram and Abu Ghraib. Ignorance and tolerance have a connection as it's hard to find an antagonist here even as the adversarial relationship between Maziar and his tormentor lets the actors evince an occasional soulful, emotional charisma.

Maybe Stewart is insinuating his motifs without fulminating as interesting reflections in Bahari's home from Tehran regarding the campaign or a cinematic and music ode via Leonard Cohen, a taboo of Iran's modern spiritual authority. A knowing, nonpartisan expose gets mileage and naturalism out of its imagery and nostalgia with a resonant payoff like the performances that go beyond the superfluous, One that comments with little sensationalism and more telling specificity on a global scale.