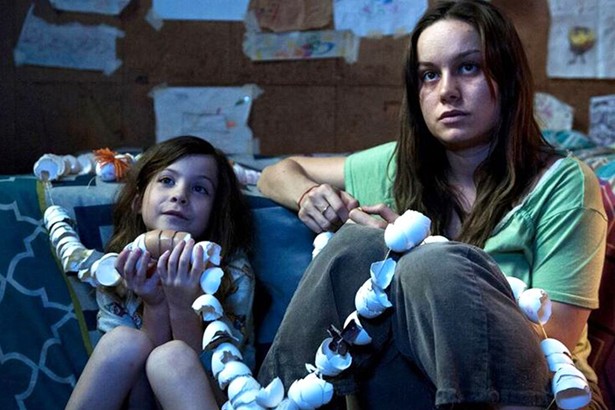 
Room doesn't dwell on violence or artificially pull at our heart strings, it just tells a compelling story.

Jack (Jacob Tremblay) who is five years old lives with his mother (Brie Larson) in a 10 by 10 shed which he calls Room.  Ma was captured when she was seventeen and forced to live in the secured restricted location by Old Nick (Sean Brodgers).  She has become his trapped source of sex and the result of that relationship is the birth of Jack.  Raising her son in the tight location with limited utilities and just enough food and other necessities that Old Nick brings to the two prisoners is a creative challenge.  She labors each day by using games and telling stories to provide a life for the little boy who clings to her.

Their world is like Plato's Allegory of the Cave where shadows became reality, here the four walls, the secured locked door and a small sky light are the only existence Jack is aware of. It is his full existence.  The two survive the evening visits by Old Nick with Jack sleeping in the closet during those nights but as he gets older he challenge the situation. The Room is Jack's only reality he is aware there is something outside which he observes through the sky light, where he sees rain and snow and leaves from trees.  But it has a different meaning for him than folks who are not locked in a small space with just one other person.

He learns through books and teaching from his mother and through experience that comes into his space.  A mouse for him is a source of play but when he feeds the small creature Ma chases it off by throwing a book.  Jack challenges her, this is one other creature that is full and live and not just two dimension in a book or on TV.  It brings the story to some what of a climax.  Ma knows it is time to explain to Jack the situation they are living in.  As might be expected he is confused and fearful the new idea of a world outside of the Room that people live in and that he might enter create fear and he resists the reality and a plan to get out.

The plan revolves around Jack faking serious illness and death to escape.

We might expect escape from captivity would be the end of the story, but existence outside becomes something very new for both of the captives.  His reality is fractured and her dark world is ended but the psychological scars begin to grow as she finds her parents are separated and her father (William H Macy) can not accept the little boy because of his father and the atmosphere around his conception.  Joan Allen as her mother is more able to help.

This appears to be a small story for the big screen, but the script and performances hold us riveted to the screen as we watch two brilliant performance.  Jacob Tremblay is spectacular as the little boy, I can't imagine another young actor now or across time who has carried that much of a film so beautifully.  Brie Larson quietly shows her strength and determination she forces us to believe she is a dedicated mother and to understand her unwinding after the escape.  Her wardrobe for the film is generally drab and tattered but when she appears to do a TV segment they make her up and she shines as a beautiful young women.

Even the room is a player which is both restricting and a provider of security to a young life that knows nothing else, but when Jack says "good by room" we know we have just experienced one of the best films of the year.