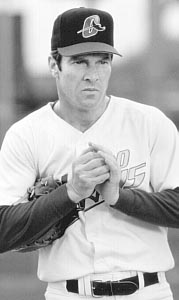 If baseball has a touch of magic The Rookie gives evidence to the phenomenon as two catholic nuns begin the story in the dry west Texas town of Big Lake where oil riggers played baseball to pass the time at the turn of the century.

Dennis Quaid's Jim Morris, the son of a committed military man, wasn't born in Big Lake and it took a number of uncomfortable moves and new schools before his parents settled in west Texas.  Morris eventually settled down in Big Lake after his short baseball career was blown out when his shoulder failed.  He retired without ever making it to the big leagues.

In 1999 baseball coach Morris teaches chemistry, is married, and has three kids, one in diapers. There is no more baseball in his future, until his high school baseball team challenges him with the idea that if they make the state playoffs he must try out for the major leagues again.

The timing of The Rookie at the beginning of the baseball season couldn't be better.  But don't expect only baseball, Morris faces the challenge of a better coaching offer, keeping his word to his team, caring for his kids, resolving his uncomfortable relationship with his distant father and most of all his determined commitment to remain close to his eldest son in contrast with his distant relationship with his dad.

Dennis Quaid who was so effective as the father in Frequency, one of the best films of 2000, convincingly plays the middle of the family here as the son and father who must put himself on the line to keep his word.

With pieces of past baseball films like; Field of Dreams, the old 1949 Jimmy Stewart film The Stratton Story and Ray Milland's It Happens Every Spring the story works on a sports level and emotional level.  With his losing team turning around its season and his second chance to play major league baseball as a background, Morris' demanding pressure filled ride leads to a place of warm emotions and triumph as the thirty five year old learns he can throw ten to thirteen miles per hour faster than he could in his twenties.

True stories sometimes fail to move an audience - they are not dramatic enough; but director John Lee Hancock moves us through the steps of success dramatically and effectively so we feel part of these battles and success.

We get to see The Ball Park at Arlington, Texas (one of the new style parks) and through tears and cheers we can imagine our dreams just might have come true if we had the opportunity and skill of Jimmy Morris.