Rogue One - A Star Wars Story 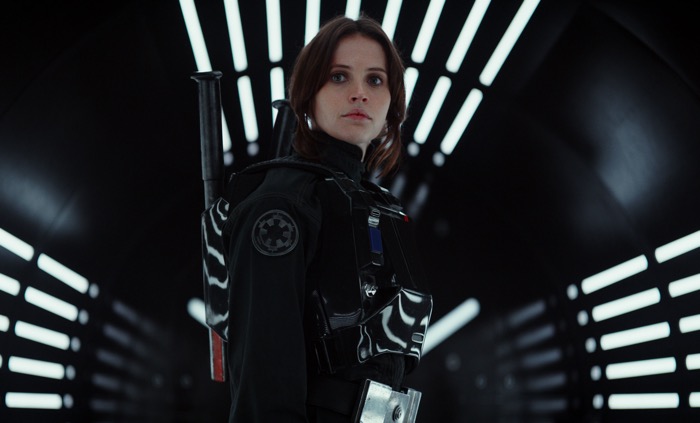 
Rogue One could be called episode 3.5, it occurs between episode 3 and just before episode 4, A New Hope.  The driving force is for Jyn Erso (Felicity Jones) who along with help from the Alliance is determined to gain control of the Battle Star blue prints which contain information that could lead to the destruction of the ultimate weapon.

This production has more in common with the original series of three adventures, episodes 4, 5 and 6 than the first three. The filming, costumes, and determination of the rebels are more in tune with the characters and stories from the original series.

The war between the Alliance and the Empire appears never ending, something like the middle east here on Earth the battle goes on and on.  Also the destruction of cities looks like Syria today and the test of the ultimate weapon brings about an explosion which appears similar to the exploding of nuclear bombs during WWII.

Jyn Erso appears early in the chapter as a small girl who seams to be abandoned by her father the principal architect of the killer destruction ability on the Death Star.  He hides Jyn Erso leaving her with the impression that just wants to get rid of her.  Later Saw Gerrera (Forest Whitaker) appears to abandon her as well.  Those impressions remain in her mind for most of the film.

When Erso becomes older, about twenty, she is recruited to help the Alliance find her father and dismantle the new powerful destructive strength on the Death Star.  Disobeying the conclusion reached by the Alliance leaders against an attack she commandeers a space vehicle which is called Rogue One.

Using Rogue One and working with Chirrut Imwe (Diego Luna) and the sophisticated robot, K-250 (Alan Tudyk) they enter into chase and battle scenes in search of the secret plans and her father.  Aided by a force of rebels and a creative blind Chirrut Imwe (Donnie Yen) they battle in space and on a planet that holds the headquarters of the military branch of the Empire.  The battles are as effective to observe as we expect not as stunning as they were in the early episodes, because we have learned to expect spectacular effects in this series.

The musical sound track is not quite as effective it was in the first three films, but Darth Vader continues to have his ominous theme playing when he makes an appearance.  The sounds of the battles also use familiar tones we are use to.

The climatic battle takes place on a planet that is controlled by the Empire, and only approved vehicles can enter the atmosphere from space with clearance from storm troopers. That battle takes up much of the action time of Rogue One and the rebel force.  Jyn Erso takes the lead attempting to connect with her father who we learn has been forced to act for the Empire, to save lives of other scientists on the project.  But her mission on the military control planet is to secure the Battle Star plans and send the image to the Alliance where it will as we know, end up inside R2D2 in Episode 4.

With what appears to be deception by her father and Saw Gerrera toward Erso is important to her hope of success in controlling the plans which must reach the Alliance.

Rogue One brings the excitement and tension we first saw in the original film (Episode 4) and it smoothly informs us of the route taken to place R2D2 and Princes Leah at the center of the next segment.  It will probably create a desire to return to A New Hope the first time we were exposed to this spectacular very successful film franchise.