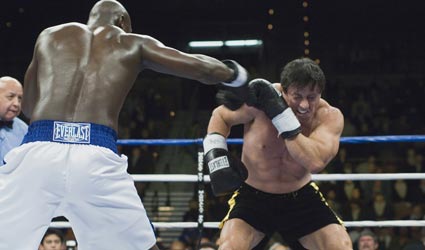 
Rocky Balboa is like a trip to visit an old friend, wondering what his life has amounted to and where is he going.

Adrian, his wife, has passed on and Rocky spends times sitting on a folding chair in front of her grave; his son Rocky, Jr. (Milo Ventimiglia) is embarrassed at the notoriety of his dad and believes his success is based on his father's boxing career. Paulie (Burt Young) is about the same and continues to hang-around the former champ.

As the new champ Mason "The Line" Dixon (Antonio Tarver) completes his last fight commentators consistently suggest that he is a mediocre champion. One network feeds a computer with Rocky and Mason Dixon stats and runs a computer simulation program to see who would win - Rocky is the victor. As we might expect in real life, HBO promoters want a battle between the two in Las Vegas where everyone can make money.

Rocky is busy back in Philadelphia as the proprietor of a modest restaurant which he owns; he regularly chats with customers sitting at tables. He's an older guy comfortable with his life. It would be fine if his son was a closer part.

Just as the audience anticipation grows, Rocky has the same emotions and he agrees to do battle with the bragging, light training Mason Dixon. Back in training Rocky lifts weights, drinks raw eggs, punches raw frozen meat and runs up those now famous Philadelphia stairs.

It all ends up as vintage Rocky, and even if we do not expect to get caught up in the big fight, we do. This is the same basic story in which we all love to cheer for the underdog. We want Rocky to succeed in this exhibition bout. Hooray for Rocky Balboa - he entertains us again.