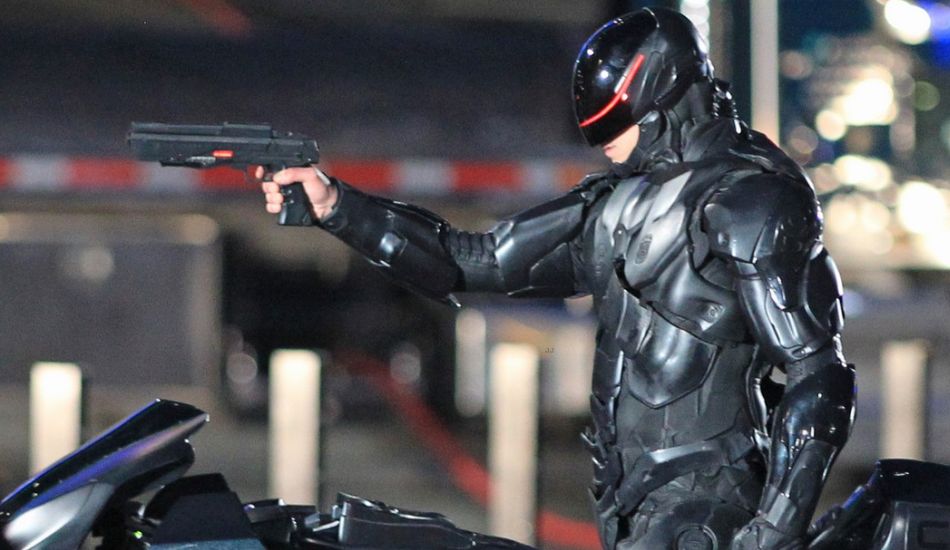 
Slick popcorn entertainment that doesn't fully deliver on an intriguing premise set in 2028 has some commentary on the role of the U.S. in a tenuous, complicated global situation to fit the dash and flash expected by a Transformers generation.

With drones "keeping the peace" in the streets of Iran, the idea of doing so at home goes through Congress from multinational conglomerate (Omnicorp) head Sellars (Keaton) with a man in the technology to circumvent the law.

Permission is allotted by the very concerned wife (Abbie Cornish) of severely injured cop and devote family man Alex Murphy (Kinnaman of TV's The Killing) to be rebuilt to striking specifications by Dr. Norton (Oldman, as the moral fulcrum and most rounded role) and trained by Jackie Earle Haley's unctuous Mattox who'll have a vendetta against his creation. This amazing fighting apparatus can be hampered by Murphy's feelings, so a change in personality can be chemically induced. This comes into play after public opinion has rallied on the side of a new blazing law enforcer.

Padilha and the writers allows some humanity to filter into what offers no ambivalence and limited character nuance with Cornish in the most one-note role (one longs from the predecessor which spawned two sequels for Nancy Allen as partner to Peter Weller's haunted, grounded presence as Alex). They allow for some colorful turns from the manipulators of the marionette in Alex, not only by the avariciousness in Sellars. Jennifer Ehle as a no-nonsense Omnicorp spokesperson, Jay Baruchel as a marketing guru, and Samuel L. Jackson as the flamboyant, overzealous robot-loving television pundit.

The direction allows for the direction to flex itself from a production that magnifies the supercop's joints and gears that has the effect especially of Transformers: Revenge of the Fallen where voice levels must be significantly elevated to be heard. Kinnaman delivers a workmanlike turn in what can generally be considered a pacey, fun thriller but really disregards what the characters are really facing. In that way it's hardly as complete and arguably more sentimental than Verhoeven intended with less pizzazz and dicey effects (especially versus other robots). A cool obstinate way with a sonorous production doesn't make this Robocop as pulse-pounding as it deserves to be to engage the control and retribution around a mightily militarily transformed human testee.