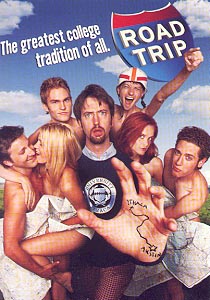 In a world of stereotypical college types, Howdy, for Howdy Doody, does look like the puppet, turns in the best trip learning independence from his domineering dad (Fred Ward) while his car blows up and his virginity is taken by Rhonda (Mia Amber Davis) with courageous exposure of her oversized body just after he mixes it up in a hilarious Rap dance routine with brothers in a black frat house.

Beth, who is innocent by today's standards, at least likes Josh before she complete's her video premiere.  His real girl friend Rachel Blanchard's Tiffany comes to understand the difference between being friends and lovers at just the right time.

Out of Utica U., Paulo Constanzo's Rubin learns he is a repressed genius but not before he offers the world of philosophy to a needy Josh.  Seann William Scott's E. L. learns homosexual tricks with a plastic gloved sperm bank nurse played with militance by Marla Sucharetza.

The screen play by Scot Armstrong and Todd Phillips, who also directs, starts out with plenty of great gags but plays nasty tricks later displaying the reaction by Trish to the tape and not making clear what is a pipe dream and what is reality.

There's something here for every adolescent boy to like, including some peep show nudity.  The hero learning about love, and the obnoxious Tom Green's Barry swallowed by a python, but it's an hour too late into the film, getting him out of the way in the first scene would have been fine.

Hooray for DJ Qualls' Howdy; we've seen all the others before.