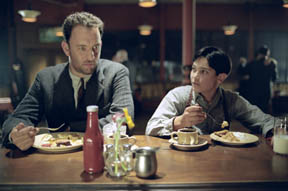 I'm not sure why, but we nearly always find films about the criminal underworld fascinating; they are exciting and troubling at the same time.  In this one the wholesome Tom Hanks we know is Michael Sullivan, a hit man for the Irish mob in 1931 Depression era Chicago.  His boss is John Rooney (Paul Newman).

Director Sam Mendes blends the family (father and sons) relationships with the business of the violent underworld.  Rooney considers Sullivan a loyal son while he understands and accepts the limitations of his biological son, Connor (Daniel Craig).  When the family and the family business come into conflict Rooney struggles with decisions he must make.

Connor Rooney, a loose cannon like Soney Corleone in The Godfather, shows his anger after an Irish funeral by shooting a gang member in the head.  Sullivan who has accompanied Connor must then protect the two by gunning down other gang members.  Sullivan's son Michael Jr. witnesses the killings.

The observed killings becomes the focus of a series of decisions by John and Michael involving their safety, security and survival.  In this world usually an apology is sufficient to forgive a murder, but concern arises when Connor Rooney fears the younger Sullivan will talk.

The two Sullivans quickly find their entire family is expendable and head for the road as Hank's Michael refuses twenty five thousand dollars to forget personal murders, and he begins to plot their future along with revenge knowing they can't trust anyone not even the Catholic parish priest.

The dark dramatic world created by Mendes presents a dark dreary depression world which revolves around stunning performances, particularly by Hanks.  He is very comfortable coming home to dinner with his wife and two sons following a hit which he carries out with precision and accuracy. The hit man is cold and unfeeling the father is warm and loving.

Hanks wears a dark brimmed soft hat which shadows his upper face making him more mysterious and ominous.  Very often rain darkens the sets and as expected much of the work of the underworld is accomplished at night; all of which creates an atmosphere of peril which each of the characters must function within.

Director Mendes uses dramatic train sounds to intensify and mute the gun shots which slaughter Sullivan's victims, he also uses unique angles, and a moving mirrored door to dramatically present a murder victim.  He allows Hanks to prove once again that he is the finest actor in film today as we actually feel sympathy for this hit man as he works to prevail.  In contrast we find ourselves laughing out loud as the younger Michael learns to drive a get-a-way car.

While Jude Law plays Maguire, a press photographer who is a hit man on Sullivan's trail, the darkness closes in and we recognize that two great actors, Hanks and Newman have given us a distinguished film that can't be ignored when award season comes around.