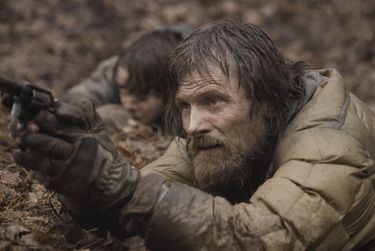 
It's a little ironic to have The Road opening for Thanksgiving - a tale with a spark of humanity and moral ambiguity is often pessimistic and colorless at the cost of those trying to struggle to survive. For those who embrace what is a marketing challenge to say the least, it probably does not go as far as expected, at least on the dramatic scale.

The director of The Proposition, a Western which happen to feature Pearce, works best on the physical aspects of production especially with lenser Javier Aguirresarobe to convey an eerie bare milieu where everything has that scorched ash gray look to it.

A stark naturalism is the result of some cataclysmic event a decade ago where fire and earthquakes left civilization without vegetation, energy, and food parcels, though with some "good guys and bad guys" left. It could have been something of the order of what sun spots did to the earth's crust foreseen by astrophysicists and scientists in the more over-the-top, f/x-driven 2012. Or, what's barely seen on-screen through a blinding light could have been the result of a nuclear arsenal or where some perceive global warming is heading.

Part existential drama, thriller, horror, and science-fiction, it's more randomly modulated than tales like Children of Men. It unfolds with voice-over and much flashbacks with colors (before the catastrophic events) to make an allegory of life and death, survival and extinction have resonance through the Man (Mortensen) and his son, Boy (Smit-McPhee). A recollection of his life with the one imagined to be angelic by him and another is an anguishing, involuntary trek to a warmer climate, even the sea, where it may be possible to live. The Man is trying to protect, and, crucially, teach The Boy.

Adapting McCarthy's rich prose seems to have been a daunting task as fleeting moments of intensity and well wrought pathos emerge on screen. The director has a difficult time setting up and sustaining scenes in something that appears to have been test-screened and smoothed out.

What the grungy, trudging Man and Boy have, they push in a shopping cart. An emotional bond keeps them alive, as they perilously maneuver in the midst of carnivorous marauders, almost on the edge of suicide. The image of a gun with two bullets left in it persists. Theron's Woman makes her presence in the flashbacks where she is pregnant before the spectular global decay, evincing some wistful, puzzling realism before her solidarity nocturnal nomadic expression.

Many desperately looking for more of the tense, terrorizing variety might be somewhat quenched when father and son deal with rebel-rousers with rifles aboard what looks to be like a military vehicle, or take refuge in a remote house in woods where dismembered, writhing bare folks are ripe for consumption. Maybe Hillcoat is channeling into admired pics like Mad Max and Night of the Living Dead.

Still, the primary goal, it seems, in The Road is to engage the struggles of an innocent boy and his bearded, very grizzled father with some fire in his life, as the former tries to find that elusive guidance, even with some social and technical touches. It's pretty evident that Mortensen puts much wherewithal in a portrait that makes Smit-McPhee rather shallow, except in some line readings as their ghastly grip lacks emotional heft.

Even with some asylum in what's left of a church, no spiritual dimension is felt, even with a prophet of sorts in a hunched, cardboarded/ragged elder Ely (Robert Duvall). The Boy and The Man have more of a connection with this sagely weathered man and one of them is also good when another traveler (Pearce) finally appears, optimistically with a family. Here's a case where Hillcoat's helming and Joe Penhall's troublesome screenplay has a subdued grimness to it, but is absent of an edgy audacity that needed to be lifted from the often plotless, dialogue-empty incendiary imagery of McCarthy.