Rise of the Guardians 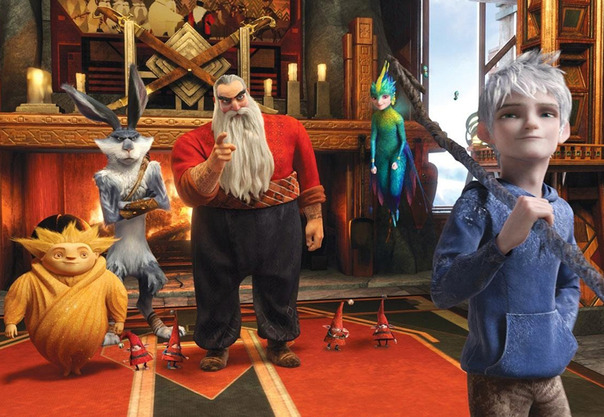 
The basic story behind Rise of the Guardians follows the search by Jack Frost (Chris Pine) for acceptance in his family and in turn as a Guardian along with Santa, The Tooth Fairy, Easter Bunny and the Sand Man.

As the film opens, effective use of 3D has snow falling on the audience as Jack Frost finds his pole which when applied to an object it is covered with the beauty of ice surface or what we call frost.  Jack joins with North (Alec Baldwin), the character is really Santa in a Russian Orthodox red outfit.  The animated character looks much like Frank Morgan the actor who played The Wizard of OZ in the Judy Garland film some sixty plus years ago.  Isla Fisher is Tooth (The Tooth Fairy) a cute little blue teardrop shaped do-gooder who pays for lost teeth.  She has small characters like her working as assistants.  One is particularly impressive as Baby Tooth.  Hugh Jackman is the voice of Bunny a rugged tough Easter Bunny who when reduced in size thumps his foot like Thumper in the Disney film Bambi.

Two kids voiced by Dakota Goyo and Georgie Grieve become involved with the Guardians as they battle Pitch (The Boogieman)  (Jude Law)  the dark character who wears a black cape and spreads dark spirals all over the world smothering all light and hope which keeps the Guardians powers alive and the hope of little kids to believe in the Guardian characters.

The script never lets the audience down it moves with exciting events and special effects enhanced by the 3D process through out the film.   That is necessary to keep kids interested and this film keeps the kids attention, there is no restless activity on their part at any time during the film.  The kids will cheer at the end when the good guys win, (what do we expect) and Pitch is sent back into his hole in the ground.

Jack solves his need to be respected and loved and the lights go on all over the world for kids, all because of the Rise Of The Guardians.