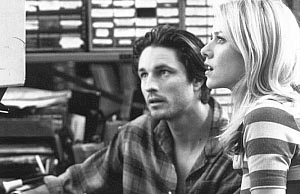 The Ring works enough supernatural shocks from a videotape as Gore Verbinski's film cites some visual power from pictures like Candyman and The Silence of the Lambs.

The preamble situates four girls watching a tape with a phone ringing at the end and a voice warning they have a week to live.  This horror-mystery has a teasing quality that comes from Ehren Kruger's fairly original story.

One of the best things about The Ring is Naomi Watts in the role of Rachel Keller, a Seattle journalist and the aunt of one of the four teens who are mysteriously killed.  Elements of The Blair Witch Project start to creep in the rainy state of Washington as Rachel's quest leads to a mountainous cabin where the deceased spent their last weekend.  Soon enough, the bright reporter finds the tape, sits down and watches it.  The phone rings and she learns her seven day clock has begun to tick.

Martin Henderson plays Rachel's ex-beau Noah who is competent in video transfers is quickly involved in the black-and-white surreal stuff displayed on the VCR.  But, young Aidan (David Dorfman) who is Rachel's child is very knowing about the eerie contents of the video.  He seems like a more catatonic cousin of the prescient children of The Others.

The esoteric ghost story agrees well with Watts who really made the most of David Lynch's intriguing Mulholland Drive.

A spooky tone is reinforced as Verbinski finds foreboding from the photography and design that uses lighting well enough to build tension as The Ring has a darkly artistic texture to it.  It adds up to an unsettling deja vu that will leave some astonished and others in disbelief with visions of a window and a lighthouse which seem to pay homage to artists like Salvatore Dali.