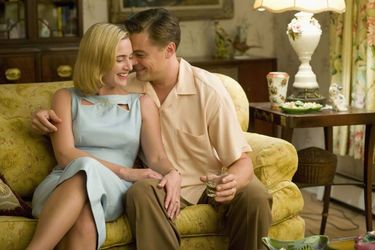 Starring Leonardo DiCaprio (Body of Lies) and Kate Winslet (quite good in The Reader), in their first on-screen reunion since the box-office behemoth, Titanic, it's a consistently compelling domestic drama. It will definitely connect with viewers who liked Todd Haynes' Far From Heaven (though less satirically inclined) and the current popular small-screen "Mad Men" which is set a few years later (in the early 1960s). Here, it is 1955.

In a nice Connecticut suburb (some of it was shot in Stamford) bored salesman Frank (DiCaprio) and bored housewife April Wheeler (Winslet) live with their two kids. But, it is clear there is an air of disenchantment and unhappiness about their life and relationship. Mendes tones down the level of smugness to connect with the personal kinks and flaws eating away at Frank and April. The result is a drama that gradually brings out the emotional underpinnings in a less disaffecting or cold manner like his dark, yet highly gripping American Beauty.

This interpretation of the halcyon of 1950s life occasionally revisits happier times within the positive and negative passionate moments, featuring infidelity and recrimination. A chance to leave their current life behind for the allure of Paris lets the tension brew when it comes to meeting personal, family goals, as well as material success.

Revolutionary Road is committed to its genre, with its instinctiveness and an overrall pleasant atmosphere set up meticulous for its potent spasmic scenes to finally subtle, haunting effect. DiCaprio and Winslet haven't lost their cogent on-screen rapport, as he works strongly off of his disposition as a jaded member of the working world and she being so capable of showing the swings within a disillusioned mother. Winslet evinced some of the same qualities in the affecting Little Children, and she's just as good here.

This increasingly nuanced tale also has adequate support down the line from Kathy Bates (as a realtor), Dylan Baker, Jay O. Sanders, and Richard Easton (especially at the close). But, standing out are David Harbour, touching as a wistful neighbor, and Michael Shannon very memorable as mentally-challenged son of friends of the Wheelers.