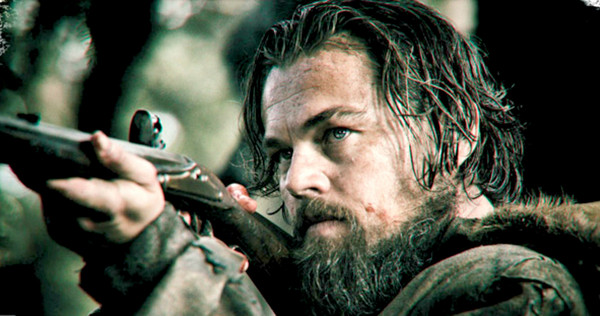 
A protracted arguably rigid pre-Western (filmed mainly in the Calgary, Alberta area) from progressive Birdman director Alejandro G. Innaritu isn't quite as adept in fusing style with storytelling this time around, allowing for some intense, harrowing imagery to a sun-dappled wintry landscape.

In The Revenant, an ordeal is played out with compelling physical, subliminal strands as Leonardo DiCaprio's hirsute real-life frontiersman/fur trapper Hugh Glass goes through quite a period of quiet wretchedness in a very debilitating state to say the least.

The undaunted expertise of Innaritu (perhaps capturing the spirit of earlier efforts like Amores Perros, 21 Grams and Babel) pays off in the early 1820s Dakotas with co-writer Mark L. Smith almost executed as an oddly arresting  barbarous exercise from what Glass experiences - a trying tale for the onlooker as well. Older cineastes may recall Richard Harris in The Man in the Wilderness from over four decades ago as Glass who is torn up and sat on by a grizzly bear (in the movie's most appalling scene that will have many wondering how it was so realistically executed). It's a variant on the 2002 Michael Punke novel about a crusty, dogged man out to recapture stolen furs.

DiCaprio isn't a greenhorn when it comes to vengeance as his work with Martin Scorsese in Gangs of New York (remember 'Bill The Butcher' Cutting) demonstrates. But, with spare dialogue his characterization is fiercely resonant heading with taut precision to that final showdown from abandonment and witnessing his part Indian young son killed. Tom Hardy (heartily rendering two roles as Ronnie and Reggie Kray who orchestrated illicit activities in 1960s London in Legend) provides a grim wit to his brute John Fitzgerald. Domhnall Gleeson and Will Poulter are recognizable in smaller, notable contributions in Glass's circle.

Not taking any time off after the Oscar-winning Michael Keaton foray which occurred mostly indoors on The Great White Way, the capricious and modern takes a backseat to barren eloquence, not to mention the Native American tumultuous and familial affection at least from flashbacks and hallucinatory traces. This is exemplified by the estimable lenser Emmanuel Lubezki (no stranger to Inarritu and his countryman Alfonso Cuaron as demonstrated in Birdman and Gravity) who accentuates the visceral challenges in a provocative enduring manner (even with close-ups and even a fogged-up camera).

Innaritu, DiCaprio and Lubezki are in rare form as Glass confronts the unrelenting elements - plains, rocks, rivers, snow from the mountainous environs - with homage made indirectly to meticulous auteurs including Terence Malick (The New World, The Tree of Life) and a seminal Sam Peckinpaugh. Even if chimera of the title returning enveloped in horrors and evincive in elaborations is left for dead.