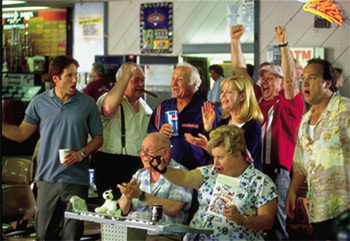 David Duchovny and Minnie Driver are well-paired in a spirit of understanding life's unusual nuances and coincidences with a strong supporting cast, including a first-time director Bonnie Hunt.  Return To Me has some Frank Capra magic in it even if the screenplay collaborated by Hunt and longtime friend Don Lake feels predictable.

While dealing with death like the now-classic Sleepless In Seattle, Tom Hanks and Meg Ryan developed quite a handle over audiences when they did not appear in the same frame until the final scene.  Another widower in the person of Duchovny's architectural engineer, Bob Rueland, comes into play here, as his work for his wife, endowed with tender kindness by Joely Richardson, to build a larger facility for gorillas at the Lincoln Park Zoo is an obsession.  His project is suddenly disrupted one night when she is killed in an accident only letting us see the blood on his shirt.  His life is turned upside down and the hurting is too hard to get over even after a year has passed.

Hunt's direction over the early scenes sometimes languishes to build the desired serious effect.  However, it leads nicely as the milieu of Grace Briggs (Driver) is developed.  This relatively young woman has gotten the chance for a new lease on life complements of Elizabeth's heart.  The transplant is something that can change the Chicago waitress' life in ways she hadn't expected, as she has been cared for all her life by her grandfather, the Irish proprietor Marty O'Reilly, endowed by a protective, but understanding Carroll O'Connor, who adds a fine Irish lilt in a restrained, un Archie Bunker manner.

How Bob and Grace finally meet at O'Reilly's Italian restaurant is put together with a sense of what both are going though, as they try to start new relationships in thier lives.  Bob is almost forced by his best friend from the zoo, Charlie (David Alan Grier), to begin to go out.  He first meets Grace at O'Reilly's while out on a date with a nag who finds fault with the service.  Then, the chemistry between the two is felt as Bob makes the waitress laugh as she sees that he's with a mismatched companion.  Hunt gets humorous twinkles from her use of co-writer Lake, as a "hair-transplant guy" who's fixed up with Grace by dear old Marty because they both have had transplants.

Driver, who seems to pick good scripts, has done it again.  Hunt plays her best friend, Megan, a caring mother, but sometimes coarse wife, as husband Joe, a hearty, somewhat irresponsible working-class type, played with humor by Jim Belushi, gets on her nerves.  They've been her guardians, along with the clan at the multi-ethnic, Irish-Italian O'Reilly's as Grace's Italian uncle Angelo (Robert Loggia), and the senior denizens who occupy the intimate diner are acted with wit and a feeling for romance by Eddie Jones, William Bronder, and Marianne Muellerleile.

Using the locations of Chicago, from the opening aerial shot panning over a skyscraper, through the Lincoln Park district, and the beautiful Buckingham fountain, Hunt makes everyday life come from the heart of winsome Driver, an aspiring artist who finally paints in Rome, and a charming Duchovny who warms to the insightful dialogue Grace and her oddly appealing circle of family and friends produce.