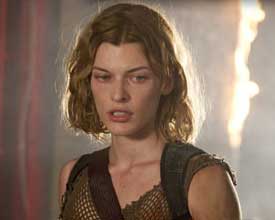 This sci-fi horror opus that some theater chains are able to show in large format will generally please those familiar with the Capcom computer game series. The second installment to box-office hit Resident Evil subtitled “Apocalypse” invests much in production and action, to the detriment of story, this time scripted rather hastily by original helmer Paul W.S. Anderson (Alien Vs. Predator).

Milia Jovavich is up to the task of the unrelenting violence in an unwieldy fashion that keeps her lissome, tough “regenerated” Alice busy, though this sometimes steroid-like futuristic spin on Dawn of The Dead is mostly underwhelming.

Director Alexander Witt goes from Anderson’s sanitized plot to change the subterranean setting to a suburban Raccoon City. After a neatly rotating visual pan summarizing the first film, something awful has happened that sends the masses into a panic and a mass exodus. Like the pretty decent re-imagining of the George Romero cult hit with Sarah Polley and Ving Rhames, zombies are on the loose and ready to infect anyone with a fatal virus. It all starts from The Hive, previously remembered as the large underground laboratory where scientists work on viruses.

The wildly jagged opening rees begins to explain the source of these voracious creatures clearing out Raccoon City. It seems that there’s been medical tampering by the Umbrella Corporation which tries to cover up the outbreak through a bio-hazard quarantine and a timely nuclear reactor meltdown. But, there’s our lean, edgy Alice in the wonderland of the un-dead who has the strength of a wonder woman from some bioengineering experimentation (flashbacks explain her predicament and infection with the T-Virus).

Part of her skeletal rebel team include a disgraced member of Special Tactics and Rescue Services (S.T.A.R.S.), no-nonsense cop Jill Valentine (Sienna Guilory of The Time Machine). They’ll do their best to battle their way out of the corporation’s grip over the city, similar to Escape From New York. Mike Epps (All About the Benjamins) offers moments of comic relief and young Sophie Vavasseur is awfully poised as a daughter carrying an antidote stuck in Raccoon Junior School.

For those who enjoy incoherent action and bloody mayhem, it comes after a banal PC-visualized representation in search of story. Characters pop up with the only purpose to be victims of the infected or automatic gunfire.

Anderson makes Jovovich more into an Ellen Ripley or a Trinity than a Lara Croft. Even with a vigilant Guillory on her side instead of Michelle Rodriques, the woman who has a connection to Nemesis can’t rival those empowered characters, with scenes that borrow form The Terminator, The Matrix, and, later, Black Hawk Down.

Though RE2's final half-hour is tuned to the more discerning film goer of this genre hybrid, scenes with a lightly clothed Alice and Great Danes and uncreative action sequences can’t make up for what cinematographers often blur for the viewer with ravenous glee.