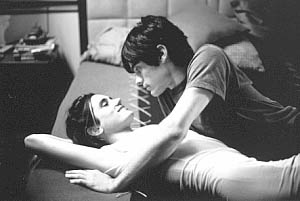 Requiem for a Dream

A harrowing descent into the subconscious unfolds with hellish tenacity under the stylish, hallucinogenic direction of Darren Aronofsky (Pi) who follows up that intriguing black and white mathematically inclined thriller, with a visceral style that amazes and terrorizes hopeful folks who undergo a metamorphosis bleaker than the addled junkies in Trainspotting.

The depressive suddenly comes after Harry, no longer needs to borrow Sara's coveted TV set which she diligently watches in a locked room.  But his enormous wealth easily procures an impressive new TV for her. She's now addicted to multi colored diet pills prescribed to help her fit into a favorite red dress worn when Harry was a tot.

The emotional wear felt by the characters and viewer isn't telling anything new about how the mind is altered through drug use and the dark side of attaining a rush.  The slick editing director mixes fast cutting techniques with garish montages preceding a dilated pupil.  Requiem for a Dream is explicitly jolting and shocking.

Throughout the bizarre, jangled nightmare Burstyn intrepidly confronts her addiction and paranoia as her aging Sara loves her son but has gone mad.  In rapid cuts from the dynamically demented Burstyn, Leto fills Harry with empathy for his mother while he is drifting.  Connelly is affecting and alluring, as she yearns for Harry, but she is fixed on her habit and Requiem for a Dream culminates with an upsetting intimacy of self deprecating inhumanity.