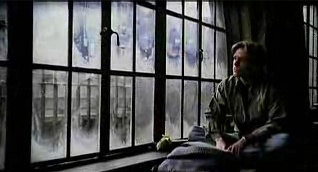 The vibrant musical which has an impressive Broadway pedigree, a Pulitzer Prize winner for Drama lacks the vitality of what Jonathan Larson's revolutionary rock opera did on stage.

Rent, updated from the classic tragedy "La Boheme", is situated in the Big Apple's East Village, and director Chris Columbus is reverent to the play in many ways, especially in casting. But, this tale of struggling artists near the end of the millenium enduring the effects of drugs and poverty isn't a poignant musical journey on the big screen.

The cast is featured at the outset singing "Seasons of Love" (actually in the middle of the play) on a soundstage and it definitely gets one in the mood based on the film's riveting trailer.

The book, music, and lyrics by the late Larson works off of the anthem "No day but today" and Columbus and his filmmakers can't make this soap opera as passionate as the actors try to make their characters battle for success and acceptance.

In their gritty existence, there's Mark (Anthony Rapp) and Roger (Adam Pascal), an aspiring, documentary-like filmmaker and a musician getting over heroin addiction, respectively.

Benny (Taye Diggs), their landlord and old buddy, apparently said their creative living quarters would be rent-free, but wants to convert it into a virtual cyber arts facility.

A mugged Tom Collins, a youthful Jesse L. Martin (who may seem to have outgrown the part), pops over to see them and becomes involved with an outspoken drag queen Angel (Wilson Jermaine Heredia).

Mark's former girlfriend, Maureen, chicly done by Idina Menzel, is now in a relationship with yuppish Joanne (Tracie Thoms). Along with Thoms, Rosario Dawson, the most recognizable Hollywood player, is the other member not affiliated with the source. Her Mimi Marquez is an exotic dancer who begins to take a strong interest in Roger.

The music is used to move the story, but while Columbus knows how to get around New York from its back alleyways, strip joints, community centers, to the corporate sector, there's no fresh connective tissue. The somewhat stale story isn't impressively reimagined as in Chicago, so one is left, more or less, to take in the auditory experience, as the characters pump emotion and their voices into diverse numbers like "Rent", "Light My Candle", and "La Vie Boheme."

Some of the scenes almost harken back to 80's clique films like St. Elmo's Fire. At times during song, sparks look to fly, but Columbus doesn't make the translation invigorating in an era marked by reality TV. Occasionally, humor enters into the sentimental and later more grave equation, with Pascal and Heredia the best on that front. Menzel displays a certain amount of sass and personality, especially during her performance artist number, and opposite Thoms. Dawson maybe the best considering her lack of stage experience to tap into the drug-addled Mimi, and her sensitivity around Roger understands the notion of waiting for death.

Larson's acclaimed play found an exhilirating way to demonstrate how a group of bohemians "measured their lives in love." Afficianados will generally be ingratiated by the chance to relive their fond memories in another medium. Yet, what was evocatively captivating is now simply staged to low-rent effect on the silver screen.