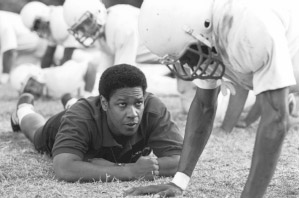 Racial tensions during the early 1970's are a backdrop to this exciting football story.

Based on real events, hard nosed black football coach Herman Boone (Denzel Washington) is  hired as head coach at the newly integrated Virginia high school, when white coach Bill Yoast (Will Patton) is expected to get the job.  Yoast receives the assistant post.

The white players arrive in front of their school in August 1971 and meet their black teammates for the first time.  The kids board separate buses that are lined up in front of the school to take them to training camp for two week, but Boone makes them integrate not only on the bus, but also in the dorm rooms.

Eating together, sleeping in the same rooms, and relentless training make the kids play as cohesive team members.  When they return home for the school semester they have to deal with the prejudices and open hostilities of their class mates; but now they back each other up as teammates and friends.

The team members are made up of the charismatic All American, the hippie type, the kid with the chip on his shoulder and the fat kid.  Their characters are pretty well defined and interesting, but the real stars are Patton and Washington.

The coaches don't really like each other, but respect one another.  Yoast believes that Boone is too hard on the kids and Boone resents Yoast treating the black kids with kid gloves.  The actors give dignity to their respective roles.

The game sequences, mostly shot at night, are pretty exciting.  One of the things that makes them so good, is that you get to know the kids as individuals and can feel for them when they're hit or hurt, or win or lose.

Remember the Titans is an emotionally satisfying drama with a lot of attitude, which I thoroughly enjoyed.