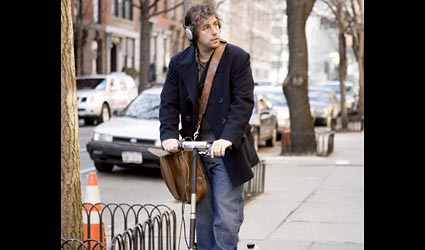 
Mike Binder writes and directs the somewhat unrefined, yet provocative Reign Over Me. His story starring Adam Sandler and Don Cheadle is sensitively drawn and sometimes drags like real life. Yet, these actors have a way of bracing an audience ready for comedy, but not always for pathos.

Cheadle is Alan Johnson, a prominent Manhattan dentist who built up his own office with partners who apparently don't give him the respect he deserves. One day he sees an unkempt guy with headphones riding down a street on a scooter who happens to be his old college roommate from dental school, Sandler's Charlie Fineman.

It turns out Charlie is a wreck of a fellow having lost his wife and three children from the 9/11 attacks when their plane departed Boston that fateful Tuesday morning. Reign Over Me is designed as a lifeline for the rekindled relationship between Alan and Charlie. Charlie has no friends and his landlady watches over him as he resides in peculiar apartment with an ongoing kitchen renovation between long sessions on his favorite X-Box game.

Charlie has withdrawn from the formerly gregarious person Alan knew (when he often sleepwalked in the nude) and takes pride in spending time with this reluctant collector of a guy who lures him out of a world of responsibilities. He's not into spending time doing jigsaw puzzles with wife Janeane (Jada Pinkett Smith) and begins to make her worry as he sporadically disappears with Charlie for some late-night bonding.

A sub-plot involves one of Charlie's patients, Donna Remar, the tall, sensuous British actress Saffron Burrows (Troy, Deep Blue Sea), who looks to him as more than an outlet for his dentistry expertise. Donna has an anguish, or a different condition than the post-traumatic stress that Charlie has gone through. But, both have lost loved ones in the process, and both will see a psychologist friend, Angela (Liv Tyler), of Alan, who initially looks to her for quick advice rather than scheduling an appointment.

This pivotal time for Charlie and Alan makes for a fairly intelligent, almost overwhelming experience at times that is levitated by Burrows, Alan's receptionist, and especially Sandler in scenes before Charlie sometimes becomes uncontrollable. The flow of bright humor and melancholy doesn't appear forced as Alan (not a professed addict) enjoys doing what Charlie does, whether at a Mel Brooks movie marathon or having Chinese food. One isn't sure what will happen when Donna meets with Alan in his office, but it's more than possible that Charlie won't be far away.

The point-of-view here is nice essayed by Cheadle who has a similar presence here as in the more than racially-motivated Crash. Being the calmness in a life where he's taking chances (think of when his wife calls him in the middle of the night) with a friend, the effect is warmly restrained and a fine model for his urban lifestyle. Sandler's Charlie (with his long, frizzy Bob Dylan coif) jams to Bruce Springsteen's "The River" and has a special affection to The Who's "Quadrophenia," which one of the tracks gets into the psyche of his disturbance, perhaps not so unlike what Dustin Hoffman delivered so memorably in Rain Man. Along with Punch-Drunk Love, this stands as his most affecting work, proving that the comedian is more than a "Dentist, Interrupted" here.

Binder works efficiently with his production crew here to make the Big Apple shine, even if the polish doesn't extend to the editing (too much of the fading to black) and the script (there is the notion of a breakthrough and an awakening). A climactic courtroom hearing seems manipulative with the way a photograph is presented. Donald Sutherland has that distinguish, no-nonsense way about him as a Judge, and Melinda Dillon and Robert Klein have their moments (especially in the final act) as Charlie's only relatives whom he shut out of his life. And with Pinkett-Smith, Burrows, and Tyler, Sandler and Cheadle know they are in something smartly observational in this microcosm of coping with calamity. Binder (who casts himself as Charlie's businessman Sugarman) makes grieving and its internalization important with subtle candor.