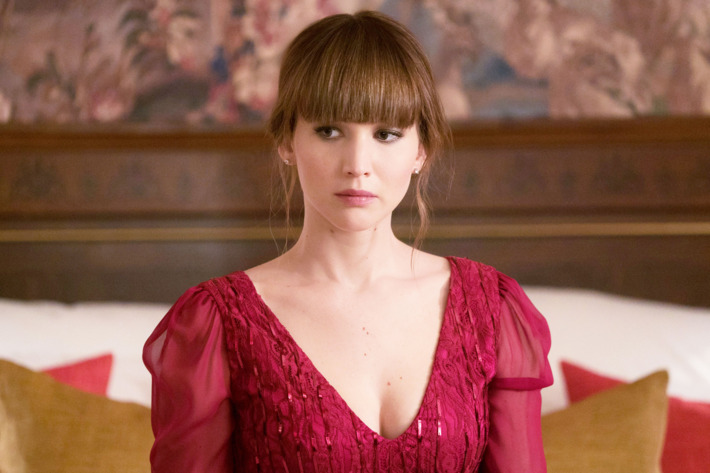 
A seemingly timely posh-looking thriller with its share of orchestral sounds, Red Sparrow, attempts to put Jennifer Lawrence in the class of Angelina Jolie and Charlize Theron. Notwithstanding, considering present scandalous geopolitics through an initially guileless, later suggestively duplicitous Russian spy, what transpires is mostly a twisted, if uncompromising letdown.

The Oscar-winner who hasn't flourished of late (given the reception of Mother (2017), Joy, or even Passengers) is obviously better than what sadly (for the most part) wasn't left on the cutting-room floor (given the epic-like runtime). Not salacious, action-oriented fun like the advertising might indicate as Red Sparrow is definitely not suited for Lawrence's Hunger Games primary demographic.

Her redeeming with Francis Lawrence (no relation) from the final three entries of the above-mentioned solid, finally waning YA franchise is mostly solemn and morbid with flourishes of lurid, unsettling violence. Ms. Lawrence's ballerina-turned-Russian operative Dominika Egorova to some could be considered a less savage cousin to the protagonist in "La Femme Nikita" played by Bridget Fonda.

Once stricken with a terrible "injury" Dominika is beholden to an uncle (a sinister Matthias Schoenaerts, in perhaps the film's best role) with strong political connections. She must become the eponymous individual through training at what someone calls "whore school" (really a secret intelligence service) to take care of targets (with their mind and body). Slipping into negligees, ballroom gowns and swimsuits Dominika gets to unveil herself and be the ruthless carnal predator all for her honorable homeland. Charlotte Rampling is the instructing Matron who encourages this ceding.

It's hard to think that Jennifer Lawrence would do some of the scenes that will undoubtedly elicit laughter given their extremity and discreet positioning which might insinuate a covenant between star and director. But, what could have been peppered nicely with the introduction of Nate Nash (Aussie actor Joel Edgerton) as a CIA agent drawn to the allure of Dominika just becomes a big tease when it comes to the meaning of double-agent and its reversal capabilities. Even so, their part of the central storyline fails to gain traction because of a predominant lack of pacing and insight into them, not to mention so-so affinity between their dramatic personae.

Lawrence and Schoenaerts arguably have the more viable communication, in part because of the latter's dastardliness while ethically divergent Dominika becomes estranged from an ailing mother (Joely Richardson). Besides Rampling, talented thespians like Jeremy Irons, Ciaran Hinds, as well as Mary-Louise Parker as a lush of an American traitor (part of maybe the most exciting sequence) do their best to keep a straight-face amidst what needed more levity and Russian oomph, not to mention on the distinctive intonations (which may be passable enough for some).

It would be wishful thinking to see more capable maneuvering into motives and development like the acuity and poignancy of "The Americans" which is concluding its final season on the small-screen later this month. Accordingly, this is a pretty unexcitable start given rough-and-tumble spy games even for Hollywood given the volatile social media climate surrounding a New Age "Cold War" (as well as the #MeToo Movement) with its presiding, polarizing leaders.