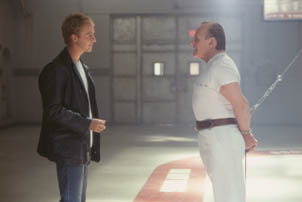 Before The Silence of the Lambs author Thomas Harris focused on the search for a ritualistic killer known as "The Tooth Fairy" who believes he is guided by a mythical character called The Red Dragon.  Director Brett Ratner (Rush Hour, The Family Man) molds a exceptional cast into a stunning tension filled mystery.

As this film begins Anthony Hopkins' Dr. Hannibal Lecter is a pillar of his community and he serves a gourmet dinner to members of the symphony board of directors as they discuss the disappearance of a member of the orchestra, whose body has not been found.  Edward Norton's Will Graham, an FBI investigator puts the codes together and with the help of three arrows stops the murder spree of the brilliant psychiatrist-killer and Lecter spends the remainder of the film in his special jail cell.

The solid material keeps us on the edge of our seats, a pin could be heard dropping as we strain to follow the mystery and the dangers each of the characters face.  The backgrounds from the intimate jail cell and the exercise room to the old mansion where Ralph Fiennes' Francis Dolarhyde lives and develops his philosophy from ancient rituals, frame the atmosphere as the performers compel us to examine and guess the next step.

With less of the Hannibal mayhem "The Tooth Fairy" presents the violence to victims, breaking mirrors and replacing eyes with the broken pieces and removing body parts from the women in the families he kills.

Our compulsion and fixation begin early, the voice of Ellen Burstyn is heard as the degrading abusive grandmother who hurls insults as young Dolarhyde, attacks he never recovers from and which are used later by FBI agent Graham.  Ralph Fiennes who continues to display an enormous range has the prize role here.  Edward Norton who is also one of the best working actors adds effectively to his body of work as does Mary-Louise Parker in a small role as the FBI agent's wife who must accept his need to continue to solve these murders even after he has relocated to the Florida Keys.  Philip Seymour Hoffman (Flawless) plays the ever present irritating reporter who eventually gets too close; and Emily Watson is Reba a blind women who "sees" Francis Dolarhyde differently than any one else, is amazing.

Lecter continues to frighten everyone near him and uses his superior intelligence to out wit and out smart, but this time it's The Red Dragon who leads "The Tooth Fairy" to murders in Atlanta and Birmingham.  Once we begin the ride it's like a roller coaster - we may be frightened but we can't get off and we wouldn't if we could.