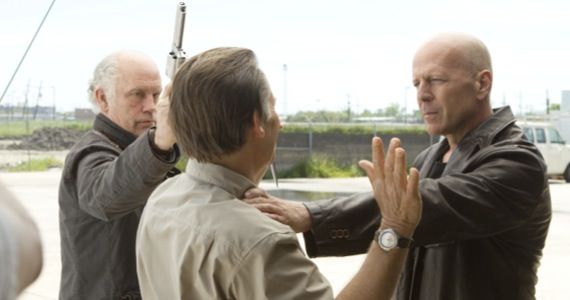 
Mary Louise Parker's Sarah Ross steals the film. Her understated facial expressions and smiles which reveals her excitement and joy at being part of Frank Moses (Bruce Willis) reentry into the super spy business help keep this adventure film an edgy comedy.

Willis and Joh Malkovich are two of the RED retired and extremely dangerous former members of the CIA again find themselves on the list of folks that must be eliminated. It all revolves around Anthony Hopkins who plays an old timer who developed Red Mercury which has been hidden somewhere in Russia for years. Hopkins developed it 32 years before and has been hidden away since then. Hopkins as we would expect fits in perfectly as an off-center scientist who has been captive for decades.

Helen Mirren continues in this second film as Victoria a dangerous British spy who now has been assigned to knockoff Willis and Malkovich. Catherine Zeta-Jones is the Russian who is in the same business only she is not retired.

Neal McDonough is the heavy who chases the retired guys and Byung-hun Lee is the Asian entry into the battle for control of the new/old powerful weapon.

Red 2 has that summer feel, lightweight action with that spectacular stuff Willis began to bring to the screen in Die Hard. So we are not surprised to see needles playing a staring role along with spiked drinks and hundreds of rounds of ammunition flying around many of the capital cities of the World.

The issue of a destructive chemical machine is not quite as compelling as the chasing of information in the original RED, but it works well enough to hold our attention.

Added to this action film is the romance between Parker and Willis and the introduction of an amorous Zeta-Jones who has history with Willis. Both the main characters have compromising scenes which challenge their partners. Malkovich is funny just standing in a scene, but the personality of his character is based on simple truth as he sees it but not as most of the World perceives his situations rises to a new level of satire.

All together the cast presents the scrip almost tong-in-cheek but not quite and that's what makes RED 2 a good summer escape.