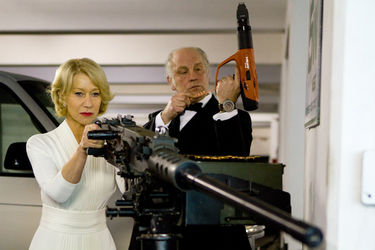 
This commercial action romp about a group of spies on the wrong side of the law will definitely appeal to those who had fun with films like The Whole Nine Yards. It could be a surprise autumn hit with good word-of-mouth and the right kind of marketing.

It helps to have that film's lead in Bruce Willis leading a good cast in the fairly satirical Red based on the DC Comics cult-favorite graphic novel by Warren Ellis and Cully Hammer.

This technically pleasing film with smooth lensing plays out as a light-hearted version of recent similar fare like The Expendables, albeit with a more accomplished ensemble which includes John Malkovich (Secretariat), Helen Mirren, Morgan Freeman, Brian Cox, and Mary-Louise Parker.

In the early portion of the what turns out to have a pretty contrived nature about it, Willis's Frank Moses is a 50-ish ex-black-ops CIA agent pulled out of his quiet routine by a high-tech hit team. The youngest of the main thespians is Parker's civil servant in Sarah Ross who has become drawn to Frank through a series of phone conversations as they seem to have interest in the same novel.  He'll sort of grab her at Chicago apartment as Sarah now needs to be flanked by him because of something more than getting his weekly pension checks.

In time, Frank has to meet up with the other top agents - Freeman's Joe, Malkovich's Marvin and Mirren's very refined Victoria - apparently targeted (in a one-by-one extermination) by the Agency for secrets they're privy to. It all pertains to an assassination in Guatemala. German helmer Robert Schwentke is able to set up the cheeky, goofy atmosphere as Frank's identity becomes known while increasingly fond of Sarah.

Even though there isn't more snap from the screenplay, the filmmakers are able to delight viewers through some explosive, chase moments and heated confrontations. Freeman might be shortchanged the most of all the roles as the camouflaged Malkovich offers an eccentric charm and Mirren in chic, deadpan mode.

By way of flashbacks, one learns of the way the reassembled team participated with each other, as Victoria's former and still desirous paramour Ivan (Cox), is the old Cold War spy and Russian operative important to Frank's mission against the deadly pursuers.

The acting and comedic panache helps elevate what essential becomes a routine road picture which includes an improbable cross-country task, along with Sarah on board. Red is better looking than creative as its bravado carries it through the idea of "the power elite and the military-industrial complex" adapted from the source material.

Schwentke, who has floundered in his previous efforts, most recently in The Time Traveler's Wife, gets the most out of an action comedy that veers from gratuitousness into something amusing. Especially when you have nice rapport especially between a seasoned Willis and Parker, as well as pros like Malkovich and Mirren that help make it more watchable and enjoyable than it really seems to be.