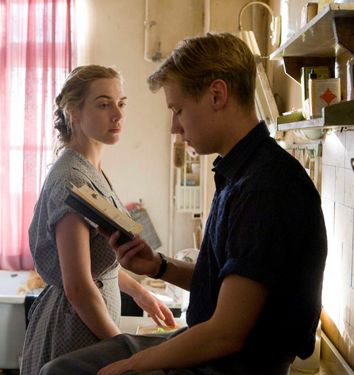 
The Reader was one of probably many films affected by last year's writer's strike; it doesn't mean that Stephen Daldry's latest effort centering on the Holocaust fallout isn't capable of flexing plenty of melodramatic muscle. Maybe it does justice to German writer Bernhard Schlink's praised novel, but in a zigzagging manner that might be too sophisticated for its own good.

Starring Kate Winslet, Ralph Fiennes (In Bruges) and late teen David Kross, the adult-minded picture carries plenty of sexual charge to it without subtitles as the actors use light German intonations. Kross is the rapidly maturing middle-class Michael Berg, played later in life by Fiennes, who has a very close relationship with Winslet's Hanna, a 30ish tram fee collector in the late 1950s.

The smart, secondary schooler gets more education from the somewhat austere, rather zaftig Hanna as he visits her on a regular basis after classes. Perhaps a sense of the title is Michael as she prefers to listen to him recite the classics before things get really gets passionate. The "kid", as he is called by Hanna, has a day in the country with her, and crafts a poem with her in mind. His feelings allow him to deflect the warmth bestowed on him by some nice schoolgirls.

But, in David Hare's sobering screenplay, Michael is stunned after Hanna suddenly leaves without a word, and becomes stunned years later (in 1966) when he is a law student observing Nazi war trials. It turns out Hanna was an SS guard at a concentration camp during the war, and someone is testifying that Hanna used to make the prisoners read aloud to her. The personal aching is there for someone who could be a key defense witness during her prosecution, among other middle-aged women.

Thus, The Reader has its subtle power in underscoring the pain between generations in coping with the atrocities where those like Hanna worked. Fiennes endows the older Michael, who becomes a lawyer, with the kind of gait that presents itself well, whether with his daughter Julia (Hannah Herzsprung) and, especially, with a chic author (Lena Olin) who endured a lot along with her mother.

Daldry, who made The Hours with its idea of "a life happening in a single day", again works in a crisp, classy manner with his cast and crew, especially in the unusually striking music and lush lensing by Roger Deakins and Chris Menges that manifests the changes in Germany.

The interesting aspect of what is thoughtful and sometimes intense is that the focus is on a character like Hanna. Winslet makes the most out of this emotionally torn woman, leaving Hanna's own thoughts and feelings out of the equation. It results in the viewer only getting a read on her through Michael, as well as the judicial system, which, in effect, deadens the desired payoff. Yet, she and Kross have quite an on-screen rapport, notably in the carnal exchanges, which probably was the best Hanna could do to quell the burden of her former life.

The final reel is delivered with irony on the conflagration that has come long before, realizing the process of learning and getting better. This cinematic document on the Holocaust does well to penetrate the attitudes that would lead to reconciliation on a personal and national level. But, the accent on Hanna limits the full impact of a sensitive and thoughtful picture dedicated in loving memory of the late Anthony Minghella and Sydney Pollack, who formed half of its producing team.