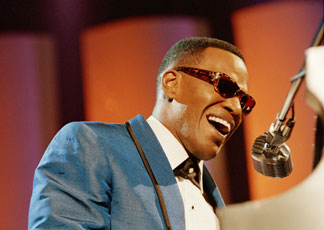 Jamie Foxx is terrific playing musical genius Ray Charles. He so embodies the man that you’d think you were watching a documentary.

Foxx has the tilt of Ray’s head, his walk, his broad smile and even the jerky movements of a man ravaged by drug abuse, it is one of the year’s best performances.

Taylor Hackford’s film begins with Ray as a child growing up with his younger brother and single mother in Georgia. He loses his sight when he is 7 years old and his mother, who’s never been handed anything in life, teaches him to use his other senses to make up for his blindness. She’s strict with him because she knows that no one is about to give him a break and he has to make it on his own. It’s a lesson that he learned well.

Ray also experiences a terrible family tragedy and it is shown to be the reason that he makes some of his decisions as a man, some of which were destructive.

His musical career begins with him playing backup piano for a band that travels from one Southern town to another by bus. He becomes more and more popular and eventually he is the lead performer hiring his own band members and backup singers.

His musical innovations included mixing blues with gospel and incorporating country into his act. Both were met with some opposition, but Ray could sell a song and his music began selling millions of albums. Ray’s own voice is on the terrific soundtrack and he cooperated with this biographical film until his death earlier this year.

Ray’s personal life was as colorful as some of the venues. Kerry Washington plays his wife and she’s wise to Ray’s womanizing, but puts up with it as long as he keeps it out of her house and away from their children.

Two of Ray’s lovers are portrayed by Aunjanue Ellis and Regina King, but there were a number of other girlfriends and illegitimate children. Drugs also played a large part, but after a second arrest and a stint in rehab, he kicked the habit of heroin.

Ray Charles was a complicated man who lived his life to the fullest. He made a huge impact on the music industry and was a very smart businessman who brokered some very effective deals for himself. His music, which fills this drama is enjoyed by millions and is a memorable part of history. With Foxx’s superb portrayal of him, we get to know a lot more about this very talented flawed, man.