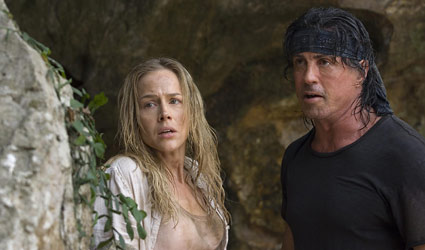 
John Rambo, the Viet Nam vet and lonely warrior is back after a 20 year absence, and this time he's working as a poisonous snake wrangler in the Thai jungle.

Sylvester Stallone co-wrote, directed and stars as Rambo. He looks much older of course, and a bit tired, but his buff physique is up to any challenge and this time the challenge is a brutal, sadistic foreign army.

Rambo is still a man of few words. He does his job and keeps to himself while taking his boat up and down the river that borders Burma, now called Myanmar, looking for snakes to sell.

After 60 years of civil war, the country of Burma is a very dangerous war zone, and the newsreel clips that open the film show horrible atrocities being perpetrated on the poor defenseless refugees by the military faction.

A group of well-meaning, yet naive missionaries from the U.S. ask him to drop them by boat on the Burmese shore, so they can treat people both medically and through religion. Rambo tells them no, because he believes that no amount of nourishment for their bodies or souls will change anything. He never really articulates that message clearly, however he just grunts and scowls a few times for emphasis, and we get the message.

He does change his position after Sarah (Julie Benz), the only female in the group, gives him reason to have a glimmer of hope for the world. So he drops off the missionaries off and goes on his way.

Once there, military thugs invade the village and kill most of the villagers while taking the missionaries to a camp where they are tied and held awaiting a gruesome fate.

Rambo is called into action when some foul-mouth, grumpy mercenaries hire him to bring them to the place where he dropped Sarah and her friends for an attempt at rescue.

In an interview to promote the film, Stallone said he wanted to emphasis the violence that is really happening today in that part of the world, and the United Nations and the U.S. should become involved. He also said that as bad as the film depicts, it is far worse. All I know is that even with my eyes closed throughout a good portion of the film, I still saw enough arms, legs and heads being blown off or severed, to last me a lifetime.

Stallone wanted closure to the Rambo character. He appears to have accomplished that. Rambo comes to the realization that he's a born warrior and is doing what comes naturally. At 61 years old, he still can handle whatever comes along.