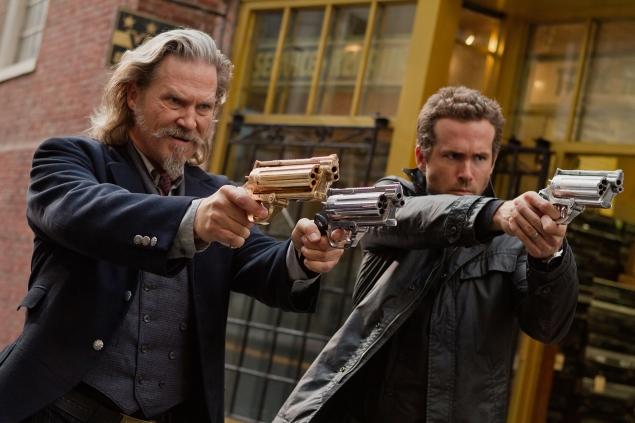 
Broad and juvenile is this 3D-realized comic-book adaptation starring Jeff Bridges (who came in for Zach Galifianakis) and Ryan Reynolds that for many will call to mind the Men In Black films and even the more dramatic Ghost with the often familiar end-of-the-world scenario with tunnels in the sky and skyscrapers demolished.

In the afterlife there's a chance for redemption under the auspices of the eponymous organization presided over by Mary-Louise Parker's Proctor, less loopy and more straitlaced than her Sarah in Red 2. Nick is paired with a gruff voluble maverick Wild West type, Bridges, doing a little of his True Grit schtick with an over-the-top air of desperation in chewing the scenery as old lawman Roy.   Nick wants of course to use his new position to take down Hayes while he learns the ropes about "Dead-Os" obstinate souls unwilling to move on to their final destination. Reynolds, in this milieu, again doesn't have the charisma to handle this kind of load so its up to Bridges to try to do his wacky best in what turns into a hackneyed mess. It'll take a little time for them to work out their issues when not throwing them off a building

The attempts to create the risible arises as Nick has feelings for former spouse (Stephanie Szostak) as he is seen by people as an aging Chinaman (James Hong) while Marisa Miller is the gorgeous blonde who happens to be the bearded Roy's avatar (not enough is done with this concept to make it truly amusing). In the presence of Indian fast food these malefactors become wild, bulbous destructive creatures. At least Robert Schwentke (the German helmer who made the original more entertaining Red) offers a manageable run-time to the glaring, incongruous bombast as Nick and Roy have to deal with a Dead-O hell-raising plan in the form of a golden tower.

It's clear that even with splashy, cheesy visual effects this partially garbled wackiness is hardly the entertainment that studio executives green-lighted though not as woeful as other big-budgeted summer fare like Battlefield Earth or The Adventures of Pluto Nash. R.I.P.D. relies on sloppy, shrill excess perhaps in going for some kind of strange suave allure. At least Bridges can be noticed in a better (vocal) light in the end in combination with the talented T-Bone Burnett on The Better Man. The disastrous coda would indicate another episode, but the persona of Bridges, a bland Reynolds (who couldn't make Green Lantern significant), and Bacon are cooked by idiotic material that shouldn't have been lifted from its source thus rendering it D.O.A.