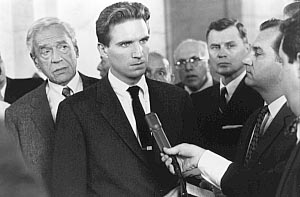 Quiz Show, the highly acclaimed new film by Robert Redford, offers audiences a brilliant cast of characters and a delightfully thought-provoking true story.  Based on the personal memoirs of Richard Goodwin, revealed in his book Remembering America, the film brings to life the quiz show fraud which he exposed while serving as a congressional investigator in the 1950's.  The scandal "marked the end of a period of innocence in our social history." says Redford, "No longer did people believe that what you saw on television was the truth."

To a post-war generation that was mesmerized by the promise of upward mobility and endless riches, quiz shows were an extension of the American dream," states the production notes. "By 1958, there were three dozen quiz shows on the air, accounting for 50 hours of network time."  That same year, Charles Van Doren (Ralph Fiennes) became a national celebrity - "the intellectual's answer to Elvis Presley" - when he reigned as the long-term champion of the popular TV game show "Twenty-One."  This game show consisted of two contestants answering questions from various categories ranging in difficulty from 1-11.  Upon hearing the category, the contestant would choose the level of difficulty and would receive the corresponding number of points (1-11) if the question was answered correctly.  The first contestant to accumulate a total of 21 points won the game and, of course, generous prize money.

The public became quickly enthralled with Van Doren, a popular professor of English at Columbia University and the son of Pulitzer Prize-winning poet Mark Van Doren and magazine editor and novelist Dorothy Van Doren.  As Redford recalls, "I remember the idea which so captivated the media about Van Doren was that he represented academic and cultural excellence."  Life magazine agreed, "Just by being himself, he (Van Doren) has enabled a giveaway show, the crassest of lowbrow entertainment, to whip up a doting mass audience..."

Attracting and maintaining this mass audience was the job of Dan Enright, the shrewdly ambitious producer of Twenty-One played by David Paymer (Mr. Saturday Night).  In his quest to maximize the number of viewers, Enright sacrificed the show's integrity.  He engaged personalities with public appeal to serve as contestants and then ensured their success or failure depending on which course of action would best preserve the show's ratings. This tendency to "give the people what they want" seemed innocent enough to Dan Enright whose job was simply to "entertain."  But Redford believes this act "was really the first in a series of disillusionments that violated our (the public) sense of trust."  And Rob Morrow who portrays Richard Goodwin agrees, "It prefigured the scandals of my generation, i.e., Watergate, Iran-Contra and Anita Hill.  I think it was the first public scandal that gave birth to the skepticism of the next generation."

Indeed, television has an incredible power to manipulate people.  TV idols can seem like part of our family.  With this power should come responsibility.  Instead, it is often used to deceive viewers in order to serve the best interest of sponsors.  At the conclusion of the film, we glimpse the faces of the studio audience exulting in the brilliance of Charles Van Doren.  I think you will be touched, as I was, by their deep involvement and belief and it may occur to you that eliciting these pure emotions in a deceptive, orchestrated fashion may be the cruelest deed of all.