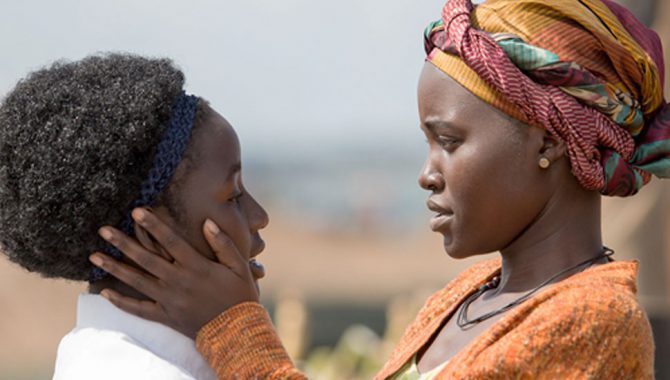 
ESPN Films is a producer of this predictable, fact-based feel-good underdog opus that merits a theatrical run as well as opening up the lachrymose ducts for some.

In the vividly affectionate Queen of Katwe set in the slums and metropolises of Uganda, the most recognizable performers are David Oyelowo (Selma) and Lupita Nyang'o (winner for 12 Years a Slave). Though the eponymous heroine is a sympathetic Phiona Mutesi, an engaging Madina Nalwanga.

Mira Nair (Amelia, The Reluctant Fundamentalist), the acclaimed Indian-American filmmaker based out of New York City and in the process of making a musical of her Monsoon Wedding is drawn into the studio's sentimental, familiar tendencies. Yet, in a workmanlike fashion from a script by William Wheeler (The Hoax) she does justice to Phiona's plight and ambition in a developing country.

Nyang'o's mother of Phiona is a struggling widow of five; the illiterate daughter sells corn from a bowl on her head and a free cup of porridge attracts Oyelowo's volunteer of a chess tournament. Phiona becomes fascinated with the pieces on a wooden board with black and white squares. The girl from one of the country's poorest favelas begins to make good on her 'carpe diem' in developing a remarkable talent (as some discerning less cynical audiences may recall Akeelah and the Bee or Million Dollar Arm) known for its cutthroat nature in gamesmanship.

It's nice to see a positive African role model on film and part of the emotional pull of Katwe (said kah-tway) comes from scenes where comeuppance occurs after a competitor's reproachful act. Oyelowo and Nyang'o offer customary creditable support but there are more untrained players who offer a winning a cheeky ebullience given Nair's effect on their untapped instinctive abilities.

A bustling center like Kampala is what the filmmaking espouses in a vibrant production which complements the storytelling, effective enough but all that shaded or original. Gridlocked traffic where livings are attempted to be made and families cooped up on motorized bikes add to the full-bodied effect of a redolent, often regal Queen.