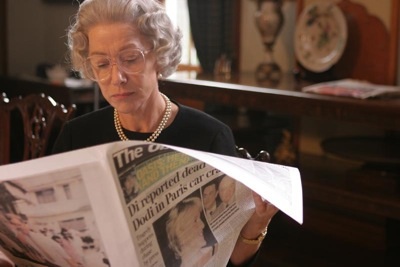 
Stephen Frears (Mrs. Henderson Presents) presents a harrowing time in British history in a touching, fascinating way with The Queen.

With shifting points-of-view and tabloid shadings, the two main characters here are Queen Elizabeth II (Helen Mirren) and Prime Minister Tony Blair (Michael Sheen).
Initially, the regal lady will be gracious to the new, young Prime Minister in May of 1997.

This amicable relationship will undergo much as less than four months later in the weeklong aftermath of the sudden passing of Princess Diana.

At the Balmoral Scottish abode the Queen and her family are quietly grieving, sheltering the young princes. Prince Charles (Alex Jennings) acquiesces with his mother's wishes, realizing what's happened. Blair, however, is trying to get the Queen to act differently.

Frears rivetingly works with writer Peter Morgan to give equal time on both fronts. From the Prime Minister's progressive end there is his wife Cherie, a very assured Helen McCrory, as well as Alastair Campbell, one of Blair's aides, played with much cynicism by Mark Bazeley.

An air of dignity is represented with a stiff upper lip in Buckingham Palace by the likes of the Queen Mother (Sylvia Syms) and Prince Philip (James Cromwell).

This sharply crafted eavesdropping has solid footing in the real events as Frears utilizes actual footage with Bill Clinton, Earl Spencer, and Diana as themselves.

What The Queen depicts with candor and authenticity is the silence and deep expression of grief of such a shifting, transitional period in Britain. The spare, yet reality-based production, in addition to the thoughtful screenplay by Morgan, is a canvas for Mirren and Sheen to flesh out their characters beyond the physical, which they do so well. They work so wonderfully together and apart as Elizabeth and Blair find out things about themselves, as well as Great Britain, which they are subservient to while leading in their distinct ways.

During the eerieness and rather unbearable anxieties, Frears and his gifted topliners show how potent The Queen can be, especially in a subtle, witty way.