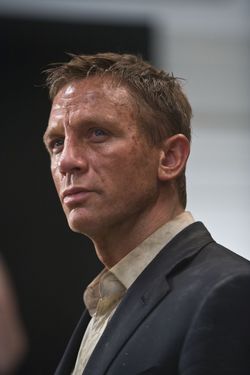 
This latest in the 007 canon dishes out action that is breathless and brutal, while sacrificing much of the elegance and wit of the previous entry, Casino Royale.

Versatile Daniel Craig is back as James Bond in the darker, grittier Quantum of Solace (whose title comes from the collection of short stories, "For Your Eyes Only" by Ian Fleming). As new director Marc Forster augments the pulse rate in the shortest Bond feature to date, the franchise die-hards might feel a bit betrayed as the film continues where the last concluded. It has a tenacious in-your-face edginess of sharper pics like The Bourne Supremacy and United 93, even as the set designs by Dennis Gasssner evoke the era of Goldfinger.

Craig is more of a jaguar as he settles into a role which requires the British Secret Service (MI6) Agent to be consumed with a desire for revenge over the death of his svelte girlfriend Vesper Lynd, at the end of Royale. Judi Dench appears often (maybe too much) as Bond's superior, M, who advocates his modus operandi, until he leaves a large carnal trail in his pursuit for the truth.

Quantum of Solace has a perturbed disposition about it that makes for quite a cinematic turbo ride, especially in the earlygoing. The interrogation of a captive, Mr. White (Jesper Christensen) at the end of Royale, by Bond and M, reveals mention of a mysterious organization "that is everywhere, but you haven't heard of it."

A tagged dollar bill leads to 007 meeting the testy, voluptuous Camille (Olga Kurylenko) in Haiti (covered in part at Panama City) who has her own agenda about her shifty lover Dominic Greene (Mathieu Amalric of The Diving Bell and the Butterfly, in full smarmy bug-eyed form), an environmentalist with plans to land a desert area in Bolivia. Camille wants to get at Bolivian general Medrano (Joaquin Cosio) who was responsible for the death of her parents. Of course, Greene, who runs Greene Planet (actually a front), just happens to be in negotiations with Medrano with aims to control a vital commodity - water.

The tension set up in the script, aided more prominently by prolific Paul Haggis (In The Valley of Elah), makes the tale feel too plot-driven. There's not enough important internalization for Craig to engage the viewer of how the character is coping with his misery.

So, Bond trails Greene to Austria to gain access to said (Quantum) organization as a coup d'etat is in the works as the chase is on to Italy, and at last a climactic face-off in Bolivia. From the sometimes claustrophobic lensing and vigorously, jarring segueways, the subtext lies in governmental collusion and global conspiracy. It almost seems that Bond is a more refined, heartless version of Jason Bourne as the CIA and his own MI6 are after him.

With some wry humor as Dench and Craig continue their fine verbal jesting, the knotty exposition is only a means for Bond to exude more authority on a personal level. Craig's caginess seems to work better in the action sequences than in the more dramatic, reflective ones, with less gravity and humor to grab onto.

Dench has that crisp efficiency, looking quite well on the distaff side of the proceedings as Kurylenko doesn't emit much sizzle with her driven, physically sharp co-star. Better is Gemma Arterton as a pragmatic British agent in Bolivia, in her limited screentime. Giancarlo Giannini offers some panache as former colleague Mathis and Jeffrey Wright as CIA agent Felix Leiter hardly has a chance to make much of an impression.

So if the stylishness and great slimy villains are in short supply, the febrile kinetic energy of Quantum of Solace makes all of the chases by car, motorcycles, boats and airplanes (antique ones used in a dogfight scene) something to behold with plenty of dazzling stunt sequences. It is often punctuated by explosiveness in a remote desert resort and a fall through a glass ceiling into the atrium of a tall building as a human killing machine thrills in ways Ian Fleming could only envision.