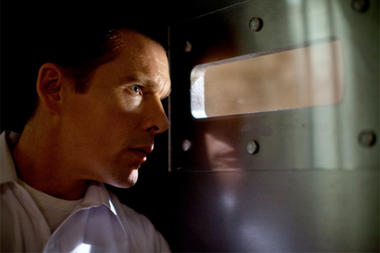 
A harrowing, if rather predictable family in-peril home-invasion thriller raises some interesting issues in compacted fashion.

A genre hybrid of sorts, James DeMonaco's The Purge (referring to a half-day or nighttime societal cleansing) is set in 2022 benefits at least from its headliner, Ethan Hawke (currently in the much different relationship picture Before Midnight) as James a successful security system salesman.

Perhaps one of the interesting aspects of the film's premise where moral themes aren't really delved into that deeply is how the disadvantaged are exacted upon as some may recall the subject matter of The Hunger Games and earlier pics like The Running Man.

So, unemployment in the U.S. is now 1% as unemployed and homeless are exterminated through this empowering enraged eponymous process that releases a primal side where even after survival life definitely takes on new meaning.

DeMonaco's second outing with Hawke (after the remake of Assault on Precinct 13) builds more apprehension into a screenplay ultimately riddled with more holes than even the similarly unnerving albeit more timely The Strangers. As the head of the masked marauders who descend upon James's supposedly heavily protected abode, Rhys Wakefield delivers much sinister smirk for the little time his character is afforded.

James and wife Mary (a thin, but healthy Lena Headey) can feel the descending, if overwrought ominousness into their particularly privileged lifestyle. Having two teens like rebellious Zoey (Adelaide Kane) and nerdy Charlie (Max Burkholder) allows for their security to go through the wringer, ala Straw Dogs; the latter has welcomed in a terrified stranger (Edwin Hodge) from said anarchists after the lockdown while the former has let boyfriend Henry (Tony Oller) in for a stay.

As The Purge progresses through suppressed violence and the anger, even nearby bitterness through an acceptance of criminal control for national betterment it's confined nature starts to get the better of it. Yes, the actual size of the family residence does come into question with the developments as well as the thought of the implications of the premise on a larger scale.

A DeMonaco in his efficient execution with a game Hawke and his costars does get a little freaky and not that scary or creepy in locating the uncomfortable conclusion that comes with the responses to some potent interpretative effect from such a quagmire. At least when it comes to purporting actions under dire circumstances