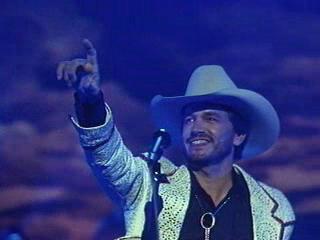 
At first glance there is little to appreciate in Pure Country. George Strait, country's preeminent star until Garth Brooks came along, has a pleasant face and manner on the screen but little or no emotion to spend on his part. In contrast, Lesley Ann Warren, who plays his ambitious manager, spends so much emotion and tantrum, the two collide like drunk drivers. Rory Calhoun, who is obviously much older than he was as a western hero in the past, is the father of Isabel Glasser who falls for "Dusty", the singerStrait plays.

Dusty is in the middle of a nationwide tour when he bolts and leaves the band because he wants off the hot table, a reference to a dancing chicken in a cheap circus which he and his friend saw when they were kids. He travels to see his incoherent philosophical grandmother and ends up drunk in the back of Glasser's pickup truck after he spots he on the dance floor of a Texas western bar in her miniskirt. After spending time at her ranch he changes his act to reflect his roots and eliminates all the smoke and lights which are phony to him. Warren, who will do anything to keep him on the road, lies to Glasser about Dusty's marital status and Glasser throws him out, setting the scene for a dramatic reunion in Vegas.

Not much of a film but there are no true villains, no violence except a few comical punches which break the nose of a bully at the bar, and everybody is decent and nice. Pure Country is probably headed quickly to TV. There are at least 40 full face close ups, a sign of a TB movie. Given all its shortcomings, it provides a two hour romance novel for the screen which can be enjoyed if you don't look too close,