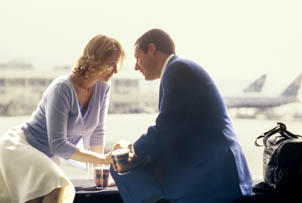 Even though his last outings haven't been that big, Adam Sandler (Little Nicky, Mr. Deeds) is an actor who wants to be taken seriously.  Director Paul Thomas Anderson (Magnolia, Boogie Nights) gives him that chance in the eclectic romantic comedy Punch-Drunk Love.

Anderson, the writer-director, usually imparts a story to the viewer that is riveting even though his visual artistry comes across too strong according to his detractors.

The polished Punch-Drunk Love comes with accolades for Anderson, from a director's prize at this year's Cannes Film Festival.  It is a singular work that benefits someone like Sandler who has made fame and fortune from goofing off in most of his movies.

Sandler will definitely surprise his following, maybe for the better, in his portrayal of Barry Egan who runs a novelty store (selling special toilet plungers) in Canoga Park, California.  The introverted man often looks sad and is prone to violent outbursts.  Barry's seven sisters have made him uncomfortable by their abusive presence.

English-bred Lena is nicely played with some peculiarity by Emily Watson, the expressive blind woman in Red Dragon.  Lena is a co-worker of one of Barry's sisters and she asks him out on a date when her car breaks down in front of his office.

Punch-Drunk Love has Barry resorting to using phone-sex to combat his solitude only to be threatened by the blackmailing lady (Mary Lynn Rajskub) on the line.  Anderson lets the colorful proceedings unfold with homage to Hollywood's Golden Age as Barry is chased by infatuated, nondescript Lena as he takes measures against a scuzzy Utah carpet salesman, a sleazy, foul-mouth Phillip Seymour Hoffman.

Sandler has an engaging rapport in unusual fashion with Watson and it works similar to his paring with Drew Barrymore in The Wedding Singer. This is the closest the SNL alum has come to being truly sweet and funny.  And as the title indicates, Anderson's unforced, breezy jaunt has a dreamy, unpredictable aura about it.  Luis Guzman (Count of Monte Cristo) is likable as Barry's colleague.

In a blue suit and tie, Sandler starts to pass off as an actor with dramatic range thanks to a whimsical, accomplished production overseen by Anderson as San Fernando Valley is oddly enriched with a beloved intoxicated feeling.