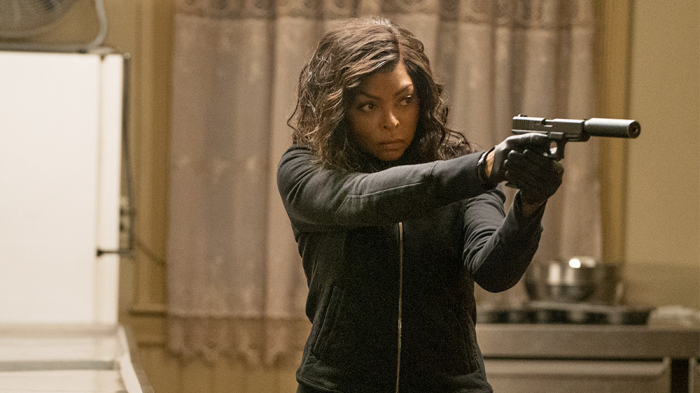 
With the theme of her 2014 film No Good Deed Goes Unpunished, Taraji P. Henson is Proud Mary a top shelf assassin who makes the mistake of showing compassion toward the son of one of her targets.

Henson has a significant performing range, in Hustle & Flow (2004) she played Shug a shrinking frightened partner to a drug dealer. Throughout the film she is mousey and frightened until she steps up and begins to sing and grabs the film for her own. Here as Proud Mary she is a woman who was a lost as a child and picked up by a family headed by Benny (Danny Glover) and molded into the most effective hit-woman in Boston. Her role is reminiscent of Pam Grier as Jackie Brown.

Along with the many hits she accomplishes, no one has a chance against her smooth quiet performance. She succeeds whatever the odds are. Her single targets fall easily and in the end shoot out an army of equals cannot match her skill.

Even though Proud Mary is filled with violent confrontation and more than necessary trips in her high end car, the film's chore is the relationship with Danny (Jahi Di'Allo Winston) the young orphan she creates in the first hit we see.

Winston is quite up to the task of a young kid who has fallen onto the streets because of Mary's hit. He works as a drug runner who delivers and collects for a gang leader. In the insecure life he is in Danny is beaten and used because he is young enough to fall under the radar.

Director, Babak Najafi allows us to watch Mary fall for the young boy. She observes his life as a parallel to hers and the saving of the kid's life early on is the good dead that will lead to her problems as the plot moves forward.

With a background of dark places in Boston and some of the bright lights of the city, Mary battles with the Russian mafia and eventually her own adopted family when the choice comes down to Danny or the family.

The build up and the quiet connection between Danny and Mary flow nicely early on and some of the action is effective, This rather small woman with a gun does her job very well. But the climax is way over the top and stretches how long a gun fight with over a hundred shots does not bring in the Boston Police Department.

Henson has a great range as Proud Mary she shows her action side and her partner young Mr Winston is clear as an angry young boy who quietly knows Mary is his safe port.

Proud Mary has enough action and compassion to be exciting and effective.