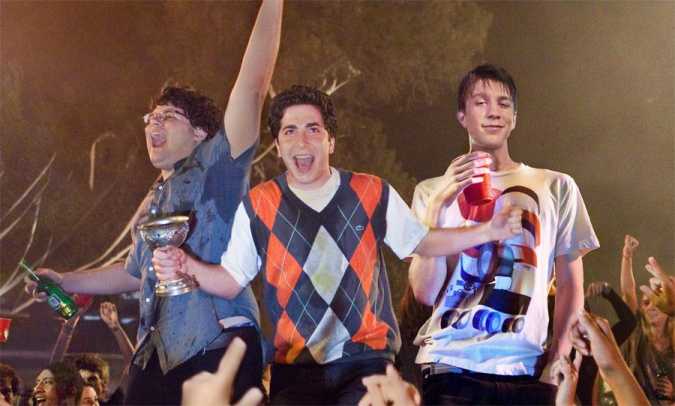 
A stretched-out series of hedonistic music-videos to feature length from director Nima Nourizadeh (who impressed some with his work for Adidas) might seem to some like producer Todd Phillips conjuring up John Hughes or interpreting "Jackass" to urgent, manic effect.

One might wonder what the late filmmaker (known for his 80's hits) would think of the unsubtle sweeping assault that is Project X (no relation to the Matthew Broderick/Helen Hunt starer which featured scene-stealing Willie the Chimp). A massive house-party gone really bad done the "found-footage" way (not to the more thoughtful degree as in the recent Chronicle) provides uproariously inane crassness that will appeal most to those who wish they could be a part of it, or those in the actual real-life socially networked events (one in Australia in particular which only had a fraction of those in attendance here).

Many will be recalling Phillips' own smash The Hangover, as well as Superbad or much earlier Risky Business (without any of that film's honest, if morally complex touch) from the premise involving Thomas (Thomas Mann of It's Kind of a Funny Story) turning 17 as his parents leave him to watch their plush estate of a residence with a huge pool. Writers Matt Drake and the busy Michael Bacall (who also penned the upcoming, zany 21 Jump Street and the underrated Scott Pilgrim vs. the World) have fun in orchestrating a "game-changing" soiree through Thomas' really obnoxious best friend Costa (Oliver Cooper). J.B. (known as 'fat Rain Man'), Jonathan Daniel Brown and Dax (Dax Flame) are also the friends who are a part of this escapade from preparation to sheer lunacy and destruction. Dax may be one of the comical characters who is instrumental in capturing the bash on his video camera (as more of it are presented through flip cameras as well as iPhones and the like).

From the garden gnome of a drug dealer to a bouncing Yorkshire terrier in a castle and a flamethrower some wild, dumb fun escalates into sheer lunacy, grand in a one-dimensional, pointless gratuitousness with the most outrageous being scripted. There's, of course, a certain amount of suspension of disbelief through a venomous virile vibe via documentary-realism. But, for its not so queasy-cam voyeurism eventually Project X revels in its excess to the degree that the climax and denouement feel tacked-on in a closure vein to bring purpose to lift the characters, particularly Thomas, out of their anonymity.

Being immersed in the ultimate party experience is what Nourizadeh and his writers achieve with a reverberating eclectic soundtrack, as reflected in the threadbare storyline and characters. The filmmakers didn't seem to be interested in the potential of Thomas with Kirby (Kirby Bliss Banton) as the prevailing rabid tone is filled with misogynistic, even disturbing streaks. So for the absurdity and opportunity to promote some new heavy bass-infused tunes, the high-octane, horn-dog antics on view brings out the best in Phillips' frat-house fanaticism from an angry midget to its preteen security guards.