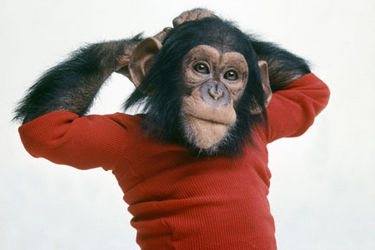 
Project Nim uses updated archival footage, dramatic recreations, and much testimony to much emotional and humanistic effect, not just an unabashed account of a unique animal.

This amazing actual story of Nim Chimpsky (named after someone fairly well-known) began in November 1973 in Oklahoma as the chimpanzee was born in a research center's cage and became part of an experiment that might help break down the barrier between two closely related species.

Under the supervision of ethically challenged Columbia Psychology Professor "Herb" Terrace, a screaming infant in Nim (taken from his subdued mother)  would be placed in a home of a rich hippie family in a Big Apple Upper West Side Brownstone home, ran by mother and psychology graduate student Stephanie Laforge.

The purpose of the far-out experiment in being taught sign language while raised among humans of acquiring this task of the deaf would result in a vocabulary to express his desires, though the project ultimately was compromised as Nim became more aggressive and equally clever.

After outgrowing his first family, Nim would be taken under the care of female students, including enthusiastic Laura-Ann Petitto in an expansive residence of Columbia University. At 5, Nim was finally relocated back to the Oklahoma research center (which begins to lose its financial footing) to learn how to cohabitant among those like him.

What is definitely challenging and complex drama in the hands of an expertly adroit Marsh plays again like a riveting, unpredictable potboiler. Nim is jettisoned around, sold into medical research, remanded to isolation in an upstate New York lab, and later bought by an animal rights activist into a Texas animal refuge for abused horses where there's no signing humans or chimps in sight.

This ape communicated in ways his human "family" could never imagine as the proceedings taken on more of a mission with more media coverage and liberal legal backing. Marsh cuts a fine streak of moral relativism into people with the vulnerability and austerity in view that elicits some droll and unnerving moments.

An honest, unsentimental portrayal can be a mite grim and sad (especially for those so devoted like Betty White) as the people around Nim tell their part of an intriguing, oscillating story.

To have learned about Nim is all the more worthwhile for the important questions it raises (especially regarding parenting) even as someone so affectionate and dominant gets to partake with the likes of dope-smoking Grateful Dead worshipper Bob Ingersoll. With much cultural and biological forces at work, this might be the more revelatory prequel before the big studio release, Rise of the Planet of the Apes.