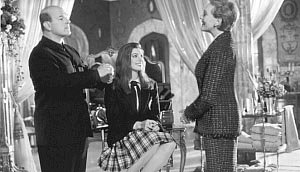 Combining his previous hit Pretty Woman and Disney's Cinderella, director Garry Marshall  has provided us with an updated tale of a girl who would change from ugly duckling to a beautiful swan or in this case an everyday teen to princess.

This story is aimed at the early to preteen market of girls ten to 13 and if the audience I viewed this film with is any indication, the target was hit.  Almost every seat was sold and, viewing the audience, 90 percent were girls in the target group.

I consider myself fortunate to have viewed The Princess Diaries with such a crowd, as the spontaneous applause and laughter showed me that: #1 I am not a teen girl and #2 that even though I did not find the film worthy of a second viewing it was enjoyable for a large population.

The Princess Diaries stars Anne Hathaway as Mia Thermopolis, the would be princess, and Julie Andrews as Queen Clarisse Renaldi of the fictional European country of Genovia.  Mia is from a divorced family where her mother Helen (Caroline Goodall) decided not to tell her of her royal lineage.  Due to the untimely death of her father, Mia is suddenly forced into making a life altering decision.

As Mia has always prided herself in being invisible this new possibility of being a princess scares her.  Agreeing to explore the opportunity, Mia begins taking princess classes that change her from a frog to a princess.  There is the usual cast of supporting characters that include the elitist ever popular cheerleader types (including teen vocal artist Mandy Moore), self absorbed jock Josh Bryant (Erik Von Detten), her best friend Lilly (Heather Matarazzo) and the love interest of Michael (Robert Schwartzman).

As expected, there is a villain and that turns out to be a result of Mia's being the last of the blood line.  Should Mia fail to become princess, the country would be handed over to another royal family.  True to form, Mia becomes the princess all teen girls want to be and our story is one of everyone living happily ever after.

Now my explanation of my grade.  The B was given solely on how much the audience, as in the teen girl audience, enjoyed the film.

There is no new story here, just a retelling of Pygmalion and not a good one at that.  There is no great script.  The acting is poor with the exception of Andrews (what a shame due to throat surgery we will never her her sing again).

Other issues include the casting of a 19 year old to play a 15 year old.  Don't young girls have enough self image problems without the need to try to be as developed and smooth as a 19 year old?  Other problems are the brushing aside of the brutal abuse that the pretty people in schools do to the plain and ordinary.  It's about time Hollywood makes a film that is intelligent and challenging for our children.

Granted fantasy is all a part of growing up, but to be forced to grow up so fast is just not right.