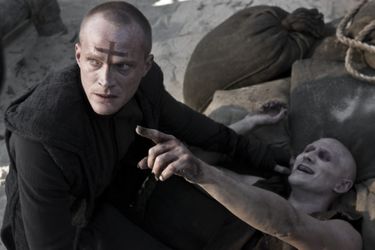 
In a world filled with members of the church and vampires, people can be one or the other. A mixed marriage is a vampire and a Christian which produces a mutant who looks and acts like Clint Eastwood from a spaghetti western, right down to the hat.

One smart decision by director Scott Charles Stewart was to summarize the history of the events which lead up to the story using animation and a voice over to explain how the two sects of folks came about. The church produced super priests who were able to defeat the creepy ugly vampires and their ilk. As the story begins we know the vampires are back when they attack a family on a farm far from the city and take a young girl (Lily Collins) captive for who knows what. The Church's Monsignor Orelas (Christopher Plummer) refuses to recognize the evil side exists and denies permission for a priest (Paul Bettany) to reactivate his powers and go after the lost girl.

With the girl's lover the priest heads out over the landscape to find and save the girl. His action of disobedience renders him persona non grata with the Church.

The cities look remarkably like the Blade Runner, and the story is a parallel of The Searchers, right down to the statement by the Priest that he will kill the young girl if she has been infected by the evil blood suckers.

The special effects work as the evil train travels through the country side from city to city and the good guys follow on their nitro powered motor cycles.

What a place to live, the choice is to be part of the Church or a Vampire or a Priest who is a warrior with a cross on his forehead. But in this Church women can be a priest, just ask the Priestess (Maggie O).

The film moves fast, quick and isn't very long and that makes it a tolerable thriller.