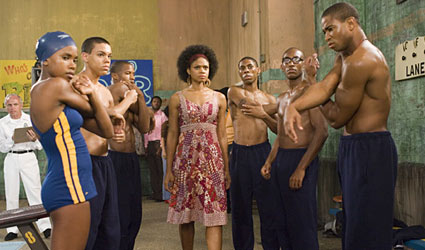 
Marcus Warchus's Pride is an evocative "actual" recreation (if you don't know the end credit scroll will maybe have you taken aback) of economic and political turbulence in 1984 when The Iron Lady was empowered to thwart the national miners' union.

The maker of Simpatico and God of Carnage still has made something timely out of an unlikely union between the miners and the Lesbians and Gays but not without a struggle in this unpadded, quite moving account. Yes, Billy Elliott and The Full Monty is reborn in a stirring way when it comes to feeling about racial justice, women's rights, gay equality, as well as the right to make a decent wage.

The LGSM, as they are called, find their way to a small hamlet (Ollwyn) in south Wales to confirm the alliance thanks in part to a nonplussed elderly receptionist and not surprisingly the denizens react in a variety of ways, appalling being one of them. Warchus builds incisively from the premise with ambitious scenarist Stephen Beresford to make many characters and their milieus resonate beginning with reticent elder Cliff, a straight Bill Nighy and stubborn tea lady Helfina (Imelda Staunton).

The subject matter with well-delineated characters sets a conventional, if somewhat difficult structure apart as the idea of acceptance touches many, like housewife Sian (Jessica Gunning) and union advocate Dai (Paddy Considine) within themselves as well as the community at large.

Without being pushy or didactic a range of social issues is presented in characters like Gethin (Andrew Scott, known for his haunting work in the series Sherlock) and HIV-infected Jonathan (Dominic West) who are a homosexual couple. Older than free-spirited closeted aspiring photographer Joe (George MacKay) who acts as a viewer portal and Ben Schnetzer's lobbyist as part of the London faction.

Old footage is interspersed with the striking verdant Welsh landscapes in pitch-perfect period rendition replete with tunes from artists like Bronski Beat as Warchus works wonders with his technicians to instill a dramatic power amid calamity and exultation. For those cognizant of the historical record, the fate of the miners' union carries a compelling message after much protest. Fondness and solidarity can win out in the bigotry around a variant populace in quite an undertaking.

Veteran stalwarts in Nighy, Staunton and Considine may be much easier to recognize out of a uniformly stellar ensemble, but Schnetzer, Scott, and West have the opportunity to showcase a vital narrative warmth through their character nexus. The joyous, unalloyed spirit of Pride has that rare rousing ability to intimately feel and wish to have been in this fairly indefatigable campaign against persecution.