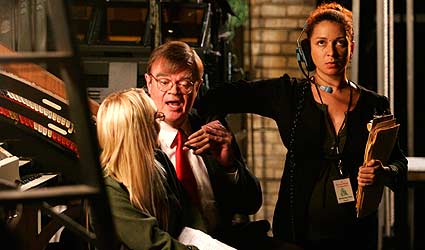 
Director Robert Altman and writer Garrison Keillor put their collective talents on display in A Prairie Home Companion with a fine array of actors.

This artistic, comedic rumination on death works deftly from Keillor's long-running radio show on National Public Radio. The ensemble that Altman unobtrusively handles is into Keillor's whimsical, odd sensibilities with a backstage feel that is not so unlike the director's look into ballet in The Company.

The audience is comfortably able to eavesdrop in this fictitious homage to radio, done in a way that Woody Allen would admire. In Keillor's screenplay the show is being aired for the final time with the new owners coming in to take over, represented by a corporate tycoon played by Tommy Lee Jones.

Keillor is doing his own baritone ringmaster self, here known as GK, and his light comedy has a philosophical ring to it. Meryl Streep and Lily Tomlin (in Altman's indelible "Nashville") are very good as nostalgic sister act Yolanda and Rhonda as one would attest to their crooning of "Goodbye to My Mama." There is a humorous warbling of the bawdy between Woody Harrelson's Lefty and John C. Reilly's Dusty when it comes to wives and moonshine. Lindsay Lohan is able to showcase an acting range for Altman as Yolanda's daughter Lola, a writer of suicidal poetry.

Altman's use of the Steadicam and his work with illuminating lenser Ed Lachman brings out more than expected, even during a moment of silence on the radio. He doesn't go for the same interlocking resonance of Gosford Park or The Player, but he orchestrates it all with a dexterity that keeps making more actors want to work with him. And, during A Prairie Home Companion, where there's more than cracking up around bad jokes, Keillor and Streep have a memorable onstage moment together (GK and Yolanda were once a couple) during a duct tape commercial that is the kind of thing that harkens back to the shimmering glory of radio days.