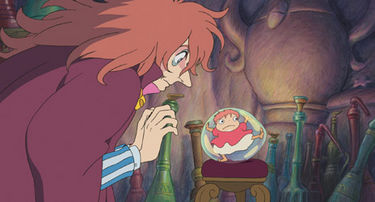 
It's good to see that the delightfully fanciful Ponyo has been given more playdates stateside as this very tasteful (and international high box-office) Japanese anime comes without subtitles.

Loosely based on Hans Christian Andersen's "A Little Mermaid", a child-like vantage point pervades this accessible "Japanese movie" (set mostly along a seaside town) which fits in some commentary along the lines of documentaries like An Inconvenient Truth and The End of the Line.

The mighty Miyazaki knows how to create some magic in a washed-out hand-drawn animated style as the simple, yet elegant story centers on a five-year-old Japanese boy Sosuke (Jonas) and his relationship with the titular "goldfish" princess he names (Cyrus) who longs to become human.

Ponyo's indomitable red-headed wizard dad Fujimoto (Neeson) and has to deal with "abominable" humankind to get his special child back from the "waste and filth". The fairy-tale-like tone of the film is affecting working on the notion of an innocent love and celebrating the natural beauty around us. Miyazaki knows how to make a very fine, playful fable that touches the young in a transforming way even if it has that air of predictability and concludes kind of suddenly.

Fey is Sosuke's retirement home working mom while he's nearby in daycare and Damon fills the part of a ship captain dad. At the home, Cloris Leachman, Lily Tomlin and Betty White enlive a trio of eccentric old ladies.

Much of the film's appeal comes the tension arising from what Fujimoto (it's hard not to notice a likeness to Johnny Depp) wants to roil against those "black souls" as Sosuke's life begins to be affected by his new friend.

The attention to everyday things has a naturalness as Miyazaki knows how to maximize a medium hardly used by the studio anymore. Memorable scenes include the princess taking a liking to food that Sosuke enjoys like noodles and ham, as well as magical shifts on the waters when it comes to fish and waves. A longer, gripping sequence involves Ponyo's goddess-like mother (Cate Blanchett) who has a tranquil effect on "the balance of the sea".

Here's another case like the filmmaker's Howl's Moving Castle and the extraordinary Spirited Away where families will be amused; engaged if they give it the chance it deserves.