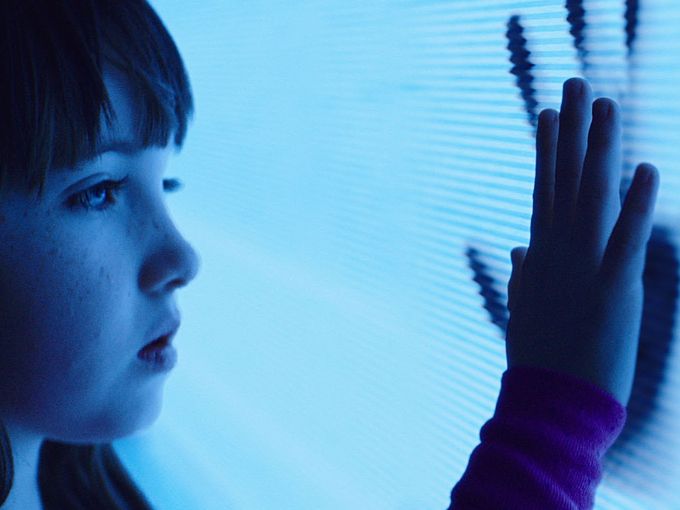 
Poltergeist 2015 is a perfectly mediocre film.

A remake of the 1982 classic staring, Craig T Nelson, Jobeth Williams and Heather O'Rourke as the daughter with Zelda Rubinstein as the house cleaner, this one  uses movie special effects but is far less tense and provides no scares for the audience.

Sam Rockwell is a bland father who with his wife Rosemarie DeWitt fight the demonic presence in the new house they have just purchased.  We find out quickly that the house is on a former cemetery and that the bodies were removed before building, but some rumor exists that only the stones were transferred and the bodies, and bones remain under the houses.  Guess which theory is true.

Little things begin to happen quickly as they move in to the house.  Although it is difficult to determine how the house was purchased in that neither parent is working, so unless they had the cash to buy it would not be possible to get into this newer house which is strange from the beginning.  Why son (Kyle Catlett) is forced to live in a bed room that can only be reached through the unfinished portion of the attic is never explained.  But for the film it provides an atmosphere where frightening clowns fall from a small closet and during a storm the weeping willow tree smashes through the sky light, reaches into the bed room and snatches the boy bringing him up to the top of the tree outside.  Other gimmicks are used like electrostatics pulling on the hair of the kids causing it to stand straight up on their heads.  Later on a drill pulls one of the house cleaners into the back of a closet. All of that diverts attention from the main focus of the film which is the removal of the young girl from the present dimension into the world of the dead who possess the dark side of the house.

Kennedi Clements is the little girl here and she projects the fear and a lack of fear from the world she has been drawn in.  In the original Heather O'Rourke drew more sympathy back in 1982.  She also passed on at a very young age a few years after the film opened.  Kyle Catlett is the son who has initial contact with the menace and understands before others in the house that something is very wrong in this new place to live.  Jared Harris is the house cleaner here and in comparison Zelda Rubinstein she was far more effective and convincing as a mysterious character with experience in dealing with demonic possession.

What is difficult to understand is the fact the family does not call in the police when the girl disappears they call the ghost busters, but how does a family explain the missing little girl to the authorities if she can't be pulled back.  They put themselves in the situation of being suspects if their daughter is not returned.

There are things that jump in the night and some during the day, but there is no real scares or tension, so we are left wondering why do the remake if something better isn't added to the story or the presentation.