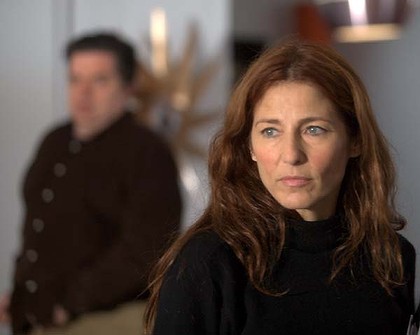 
Nicole Holofcener continues her study of relationships in the charmingly wry and often sardonic Please Give. It's gently understated with obvious affection for narcissism and the neuroses of her characters.

The writer/director has a favorite of hers in Catherine Keener leading the way along with Oliver Platt as married Manhattan-Errs Kate and Alex with beauty-obsessed teen daughter Abby (Sarah Steele). They run a successful secondhand furniture outlet having trendy stuff for sale. She's an antique dealer and would-be philanthropist, while he's a philanderer enhancing their lifestyle by exploiting local families through their deceased relatives. Furniture and bric-a-brac is bought and sold with a sizable markup.

What can be literate and narratively static allows a discerning viewer into the couple's dilemma as they want to expand on their current two-bedroom apartment. Obtaining the apartment next door isn't a problem, but it houses an elderly deteriorating, but gruff Andra (Ann Morgan Guilbert) who isn't going anywhere. Hence, what ensues has to do with "love, death, and liberal guilt."

Kate and Alex have to deal with Andra's granddaughters - Rebecca (Rebecca Hall), a kind, if immature radiology technician and Mary (Amanda Peet), an orange-tanned scornful spa clinician who can't believe that she's just been dumped.

In this sensible, if fragmentary sortie typical of the director's earlier often keenly observed efforts like Friends With Money and Lovely & Amazing it can be prickly, gabby and insightfully acerbic at times. Especially as it checks on the contradictory baggage in its characters, most notably Kate. Keener taps into Holofcener's distinctive stream-of-consciousness with Kate's emotional malaise with her charity to the destitute and wants to do more on a volunteer basis. The film seems to ask from Kate's perspective how can a good life be led with all of homeless, poverty, and sadness around.

What often stands out in a pressed dramedy that doesn't overstay its welcome is the everyday ups and downs as folks do some unattractive things. Kate realizes that in a life of consumerism she must change to be the right role model for Abby who sees success through what is expensive.

Please Give, after its cleverly calibrated opening mammogram-filled montage, might indulge in a certain offbeat pretentiousness, but an unobtrusive production and endearingly awkward characters offer some ironically laced alms into reaching out in a subtly acute and revelatory way.